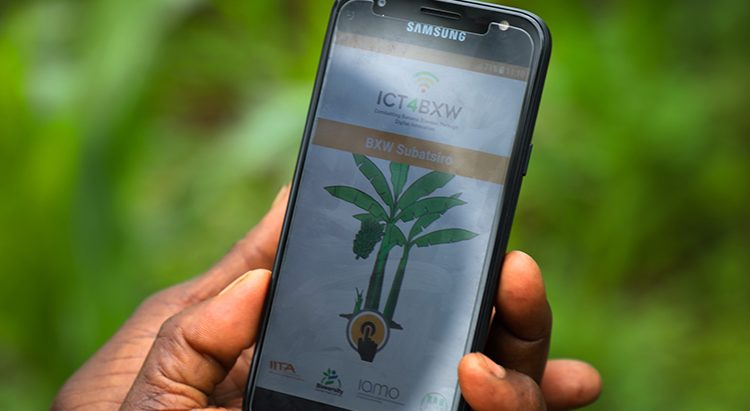 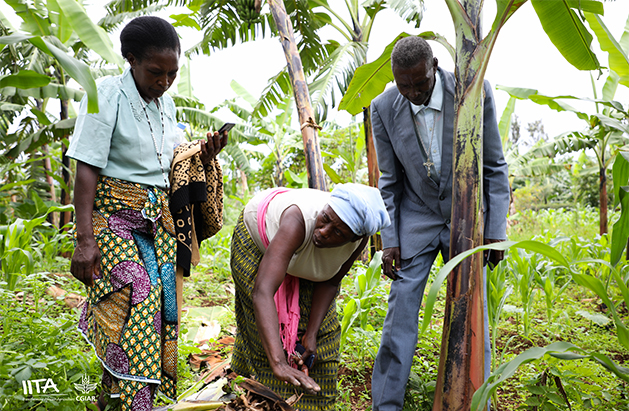 In Rwanda, banana is the leading staple food and source of livelihoods for millions of households.  However, despite being a major food security crop in East Africa, banana production has been severely threatened by the continued spread of BXW nationally and regionally.

BXW is a disease that causes banana plants to rot from the inside out. The disease is triggered by the bacteria Xanthomonas vasicola pv. musacearum (Xvm), formerly known as Xanthomonas campestris pv. The disease, which negatively impacts banana production in East and Central Africa, can cause up to 100% yield losses (per banana stand) if proper management strategies are not well implemented.

The first phase of the ICT4BXW project (2018‒2020) was implemented to co-develop, test, and co-validate a smartphone-based digital tool (BXW App) to monitor BXW incidence and empowerment of banana farmers to control spread in Rwanda. Farmer promoters or local extension agents were selected from eight districts (out of the 30 Rwanda districts) and engaged in a 15-month user-centered participatory process to design and test the envisioned digital tool. 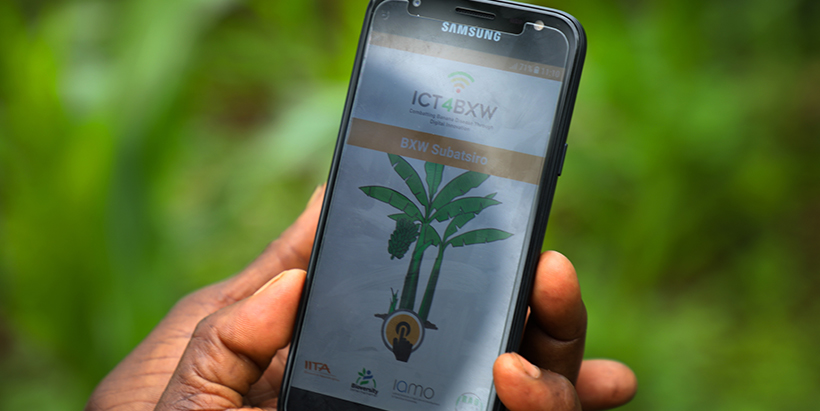 Digital application tools for the surveillance and control of BXW disease in Rwanda.

Following the successful deployment of the co-developed digital tool and related knowledge products, the project has facilitated near-real-time crowdsourcing of robust surveillance data on BXW incidence, enhanced capacity of the extension support systems, and provided actionable intelligence on the spatio-temporal dynamics of BXW. Therefore, to broaden impact across all districts, the donor (GIZ) has approved funding to disseminate the knowledge products and tools within the next three years.

As part of its objective, the project’s second phase intends to scale up the number of village-level users, such as farmer promoters and farmers, who will utilize digital (and non-digital) platforms/tools to diagnose, report, and control BXW disease in Rwanda. The project will also facilitate strategic behavioral change and the capacity of stakeholders to sustain the adoption of innovative approaches for BXW control and prevention at the national scale.

The project team aims to disseminate agronomic information, control measures for BXW, and periodic alerts for BXW thresholds/threat level through both digital and non-digital access platforms, including infographic pamphlets, available mobile channels (interactive voice response, SMS, USSD, social media, push SMS alerts), and bi-annual reporting to engage prospective smallholder farmers and stakeholders, beyond those that can be directly reached by the project.

Explaining the overall goal, Julius Adewopo, the project manager, noted, “We envision that the scaling of digital and non-digital tools for the surveillance and control of BXW disease in Rwanda will foster equitable decision-support for banana farmers and mitigate farm-level losses of banana productivity, to promote improved/sustained livelihoods and food security.”

The project implementation will target three levels of stakeholders to develop relevant capacity for the sustainability of the projects’ innovation: (i) Rwanda Agriculture and Animal Resources Development Board (RAB) entities as manager/custodians of the surveillance systems; (ii) Sector and district agronomists as enablers for the next-users; and (iii) Farmer promoters as next-users who provide direct support to farmers. This should translate into rapid delivery of BXW tools to citizens who can provide actionable data for timely intervention on BXW across diverse agroecological zones of Rwanda. Also, by adopting multiplatform delivery of decision-support for banana agronomy and BXW management, ICT4BXW@Scale will enable near-real-time access to information on best practices, empower farmers to detect and diagnose BXW, and promote cohesive communication to strengthen information sharing and collective action within the banana value chain.