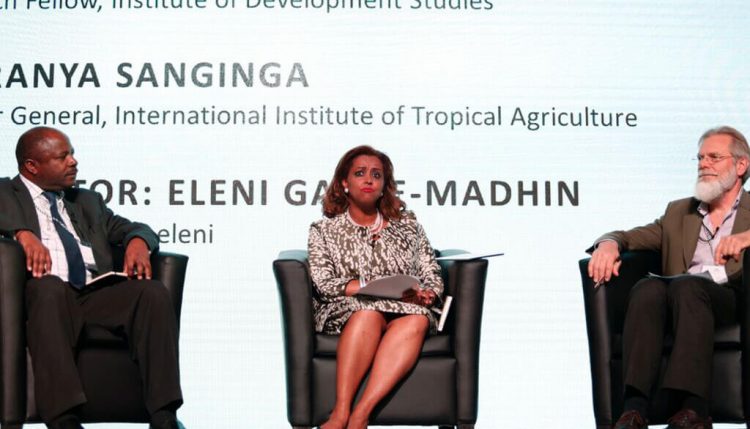 Africa’s statistics on youth unemployment can be overwhelming but to a visionary it is an untapped resource with the potential of changing the status quo of poverty and hunger which are often synonymous with the continent. The great challenge of youth unemployment can also be seen as an opportunity for them to become the engine spearheading the ‘green revolution’ in the continent. 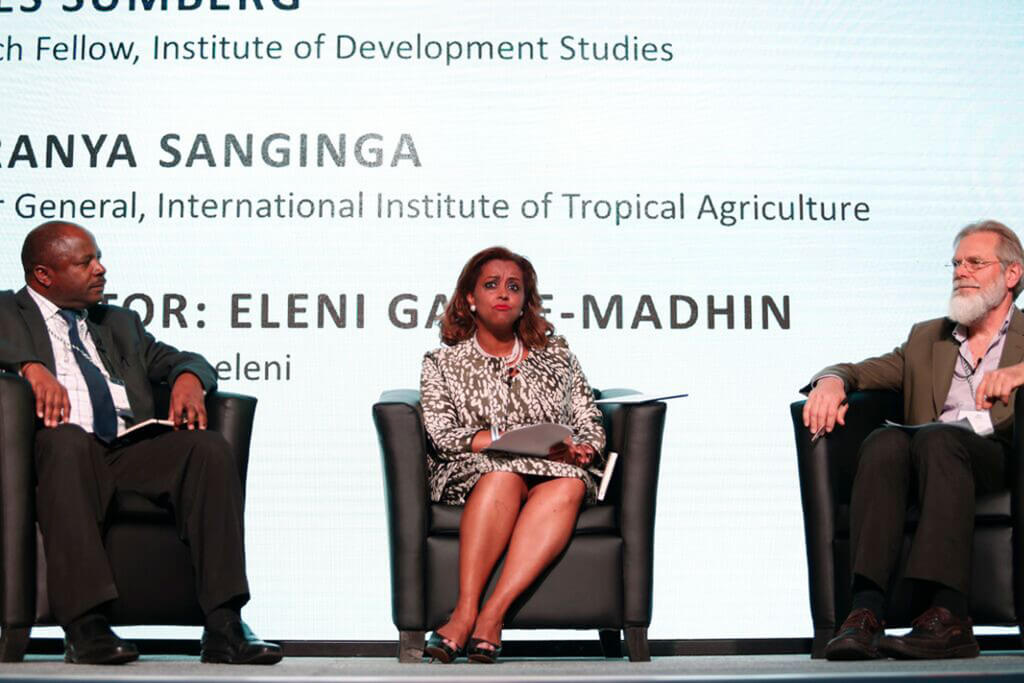 This was the argument which clinched the keenly contested debate at the Young Africa Works summit on “Agriculture as a sector of economic opportunity for youth in sub-Saharan Africa” in favor of IITA Director General Nteranya Sanginga.

The debate was organized by MasterCard Foundation at the Old Harbour Conference Centre, Westin Hotel, Cape Town, South Africa on 29 October. Sanginga went up against Jim Sumberg of the Institute of Development Studies (IDS), UK. The debate was moderated by Eleni Gabre-Madhin, Co-founder and CEO, Eleni.

About 300 thought leaders from NGOs, government, donor agencies, and the private sector committed to developing sustainable youth employment strategies in Africa congregated to discuss best practices and effective approaches for preparing young people for employment and entrepreneurship opportunities in agriculture.

During the contest, Sanginga emphasized the plight of employable youth in Africa. He stated that every year 10-12 million young people seek to enter the continent’s workforce but without success. Despite the opportunities in agriculture, African youths lack access to arable land, credit, improved technologies, practical skills and fair markets as well as other logistics and services necessary for succeeding in agribusiness. Even with opportunities opening up, most educated youth are skeptical about opportunities in agriculture.

However, using IITA’s Youth Agripreneurs initiative as an example, Sanginga effectively argued that agribusiness can be profitable for youth if they are given the right skills. He indicated that steering rural enterprise along commodity value chains within the context of professional agriculture can have a huge influence on both the livelihoods of the youth and the process of agricultural transformation. Following this approach, numerous agribusiness incubations have established many profitable enterprises including intensive vegetable production, marketing of new varieties of cereal and legume seed, fish farming and associated activities, and value-added processing of soybean and cassava.

Given opportunities and incentives, and mind-set change, rural youth can profitably be redirected toward agribusiness, service provision and market-oriented agriculture, with a huge impact upon their rural communities. Different models developed by IITA, AGRA, FARA, and CTA offer stepwise approaches to strengthening the skills of youth in agribusiness and are ripe for expansion and integration.

Sanginga therefore called for the development of a comprehensive program that forges widespread commitment and partnership, indicating that combining approaches in an effective manner would lead to delivering cost-effective opportunities to the youth for profitable agribusiness development. He specified that this sort of effort must not only extend well beyond reorientation and formal training; rather it must involve the development of detailed agribusiness plans and credit-worthy loan applications, leading to the establishment of a massive network of new business ventures and services across the entire agricultural value chain.