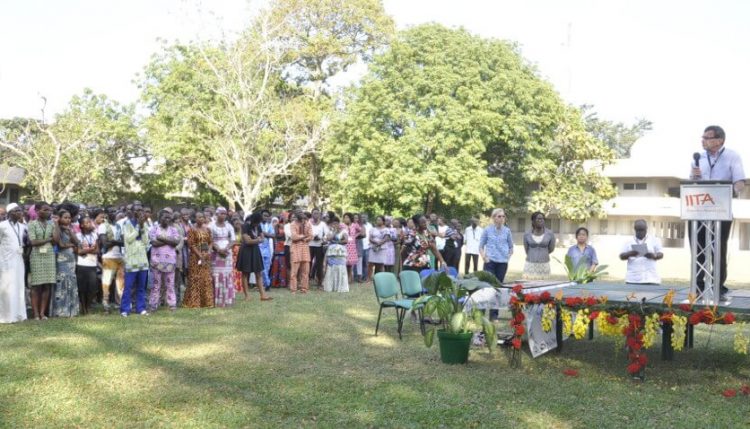 From the Board of Trustees: IITA’s results… very impressive

During a town hall meeting that brought R4D Week to its climax, Bruce Coulman, Chair, Board of Trustees, IITA, said that despite the biting cuts in the core funding of CGIAR, IITA’s success in 2015 was impressive.

Bruce Coulman addressing staff and scientists during the town hall meeting in Ibadan.

“When the Board meets, we have an agenda where we review all aspects of all the Institute’s operations. Having the meetings here allows us to dive deeper into the scientific work of IITA. I am happy to say that the Board is very impressed to learn about methods being developed to evaluate the progress in IITA’s goals of uplifting people out of poverty and bringing land to sustainability and these we found to be very interesting. It is ground-breaking research; it will be very much of interest to other centers. We also discussed the budget situation and how it is being managed and we support IITA’s way of handling it. We will be showing a small surplus this year unlike other centers who are going to be in a deficit position this year.”
Coulman also highlighted that IITA is at the forefront of taking impacts from research and translating them into usable forms by poor farmers.

“Donors and people involved in agriculture research in the developed world are really looking at the ability to make research products available to end users. A lot of emphasis is also being placed on how this is done… IITA has been able to answer this because of its Business Incubation Platform which allows us to increase the use of technologies and work with private industries and partners within the national program to get these products into the hands of farmers.” He ended by saying that he expects the Institute to break more ground in 2016.

Vox pop: What are your impressions about R4D Week?