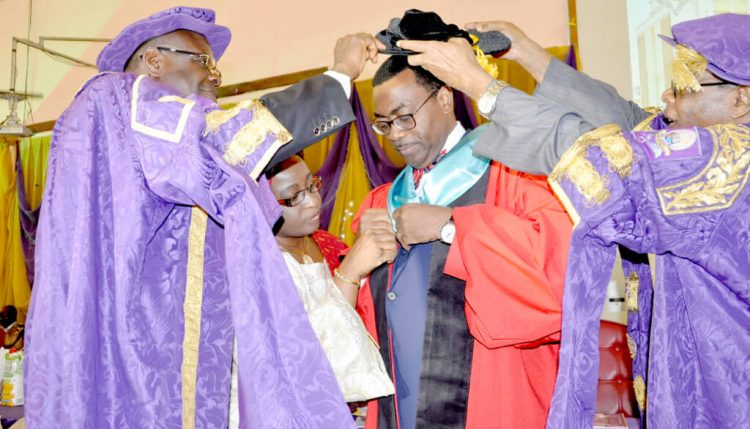 Dr Akinwumi Adesina receiving his cap and gown during the conferment ceremony.

OAU recognized Adesina’s contribution to the development of science and research in Africa. Adesina is a former researcher at IITA, where he worked from 1995 to 1998.

Other people who were honored by the institution were the Emir of Nupe, Alhaji Yahaya Abubakar, who became the 8th Chancellor of the University; Prof Jacob Kehinde Olupona, Director, African and African-American Studies at Harvard University who bagged the honorary doctorate award of Letters (D.Litt.); and a successful lawyer, Barrister of Law and Solicitor of the Federal Supreme Court of Nigeria, Chief Alex Duduyemi, who was also awarded a Doctor of Business Management (DBM).

Responding on behalf of the awardees, Adesina thanked the University for building the foundation of what he has become in life. Adesina is an alumnus of the University, graduating from the Department of Agricultural Economics with first class honors in 1981. Reminiscing about his journey in life so far, Adesina said the core values of education and character being impacted by the University is world class, and cannot be compared to any other University in the world.

Adesina urged the 2015 graduating PhD students of the university to be worthy of character and not forget the values imparted to them. He stressed the need for them to preserve their integrity and that of the institution at all times and urged them to contribute to society’s development.

“Go out, compete, and win. Failure is not an option. We have faith in you, so rise up, and shine. In the course of doing this, do not forget those who helped you along the way especially your parents and teachers. Their reward should no longer be in heaven”, he said.

Also at the ceremony, the Executive Secretary of the National Universities Commission, Julius Okojie, who represented President Muhammadu Buhari, congratulated the awardees and the graduating students.

He said the government has mapped out strategies to review agriculture policies that will provide employment for youth in the agricultural sector. He said that with the dwindling price of crude oil, agriculture should become the backbone of the economy. He added that the development of farm implements that will make agriculture attractive to youth and also help farmers.

The IITA Youth Agripreneurs made use of the opportunity to showcase their products at an exhibition stand during the event.

Meanwhile, speaking at the AAUA convocation during the institution’s 6th convocation ceremony, the Governor of Ondo State, Olusegun Mimiko, stressed the need for partners to invest more in education to enhance research and productivity in tertiary institutions. He commended the University for being recognized as the best state university in Nigeria.

Presenting the graduating students to the governing council of the university, Vice Chancellor Igbekele Ajibefun urged the students to remain good ambassadors. He stressed that the university has resolved to continue to produce globally competitive, technology savvy, entrepreneurship-driven, and socially responsible graduates who are problem solvers in a resource-challenged world.

He also urged the awardees to help ensure that the society becomes a better place for younger generations.

Other awardees include Oba Fredrick Obateru Akinruntan, the paramount ruler of Ugbo Kingdom in Ondo State who was honored with the Doctor of Letters and chief Bisi Ogunjobi, the former AfDB vice president who was also honored with a Doctor of Science.