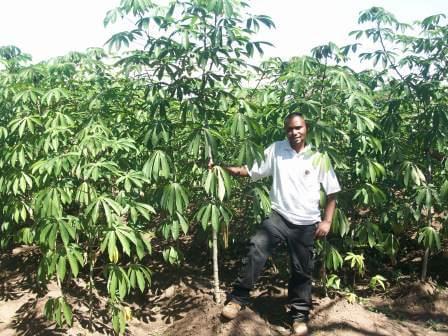 A recent assessment on IITA improved cassava varieties released in the Moba region of DR Congo has shown that the crop contributes significantly to food security for households in the region. The varieties were introduced in 2010 during the first phase of the USAID-funded Development Food Assistance Program (DFAP) implemented by IITA and Food for the Hungry International (FH). 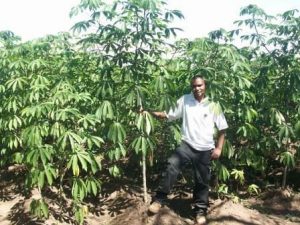 A happy cassava farmer shows off his field planted to IITA improved varieties.

Prior to the introduction of the improved varieties, Moba residents had battled food insecurity for more than four months every year. In addition to ensuring constant food on the table of Moba households, the new cassava varieties have also increased average root yield from a paltry 2 tons/hectare to about 20 tons/hectare since 2010.

Kande Matungulu, IITA scientist based in DR Congo, said the breakthrough was a result of novel agro-technologies developed by IITA. He also added that “IITA and FH efforts succeeded in reducing food insecurity in the former Moba region, now known as Tanganyika Province.”

Paul Dontsop, IITA Impact Economist based in DRC, said “During the first phase of DFAP, IITA and FH did a very good job both in North Katanga (Kalemie and Moba) and South Kivu (Walungu). More than 30,000 households were directly involved in project implementation. If we consider the fact that the average household size in those areas is about six, we are talking about 180, 000 people helped directly by the project.”

To further spread the gains from this breakthrough, proposal development for a second DFAP phase, built on the good results and the lessons learned from phase one is ongoing.

2016 is the Year of E-Research and Open Access in IITA!