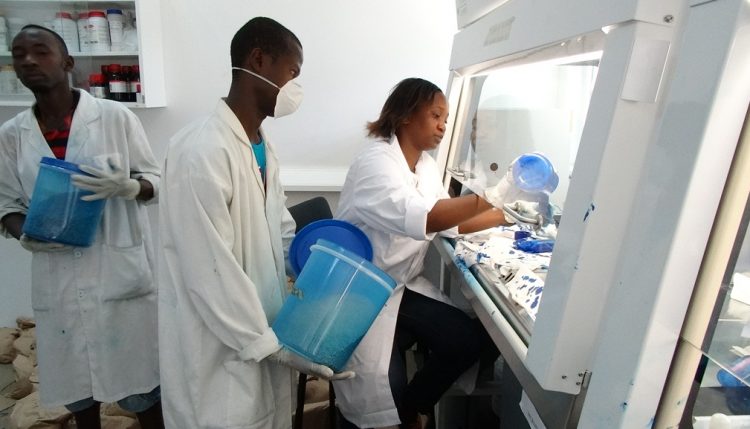 IITA has produced and dispatched over 10 tons of experimental biological control products (Aflasafe), which will be tested in field trials for their efficacy to reduce aflatoxin contamination in three countries in Eastern and Southern Africa. The production took place at IITA’s research facilities in Tanzania. 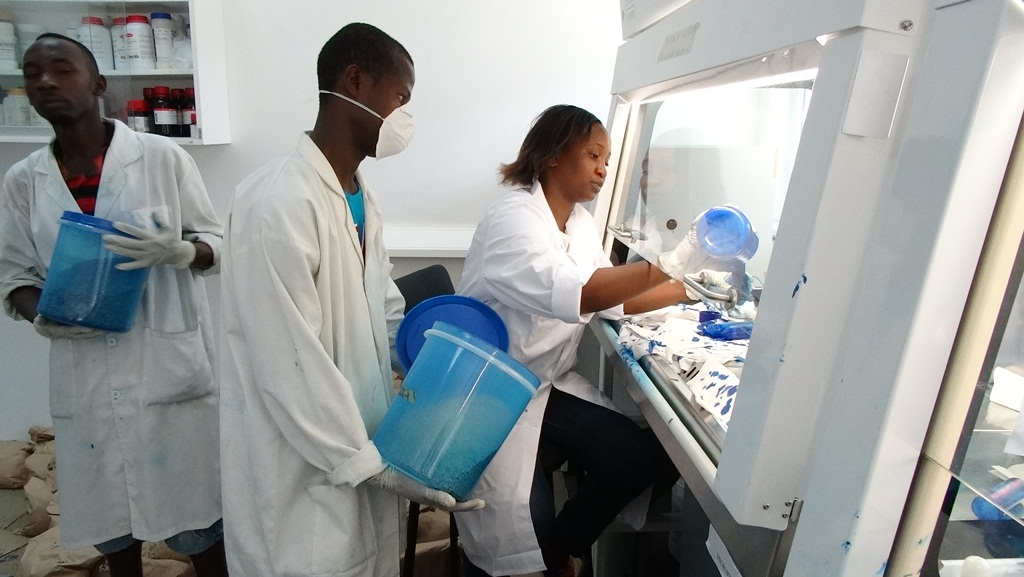 Team at IITA Tanzania preparing the Aflasafe in the laboratory.

This is part of the Institute’s efforts to develop a sustainable and safe technology to reduce aflatoxin contamination prevalent in two of the most important key staple crops, maize and groundnut. Aflatoxin is a deadly poison produced by certain types of mold and is known to cause cancer and stunting in children, among other health problems.

IITA, in partnership with USDA-ARS and local national institutions, has successfully adapted the biocontrol technology and developed a biocontrol product with the generic name Aflasafe, which reduces aflatoxin contamination of groundnut and maize consistently by >80%. Currently, the product is registered for use in Nigeria and Kenya.

The biological control product is made from strains of the mold, Aspergillus flavus, that do not produce aflatoxin. These good strains outcompete and displace aflatoxin-producing strains of Aspergillus, thus reducing aflatoxin contamination of important food security crops like maize.

For each country two formulations of the biological control product were produced: (i) a country specific product using strains only found in that country, and (ii) a regional product produced from strains from that country, but these strains also occur in other countries. For
Malawi these were MW02 and MWMZ01—the former was made from strains that are specific to Malawi while the latter was made from region-specific strains. Similarly in Mozambique MZ02 and MWMZ01 were produced and dispatched. In Tanzania, TZ01 made from region-specific strains and TZ02 made from strains that are specific to Tanzania, were produced.

The atoxigenic strains were identified following rigorous tests and characterization done in IITA’s laboratories in Nigeria and USDA-ARS in Arizona, USA. These isolates lack the genes required for aflatoxin production and therefore will not produce aflatoxin in nature. Each product is made up of four atoxigenic strains that are widely distributed in each country and belong to different classes.

To produce the biological control product, atoxigenic strains of A. flavus are coated on roasted sorghum, which acts as a carrier of the product. The sorghum is roasted to prevent it from germinating when applied in the field. A polymer to stick the spores of the fungus to the sorghum and a dye, a natural food colorant, are added. The final product looks blue (from the blue dye) and is readily distinguished from untreated sorghum.

“The production of 10 tons of aflasafe was by no means easy as we had to do it manually—it was three weeks of back-breaking work for our staff, partners, and other hired laborers,” said George Mahuku, IITA’s Plant Pathologist, who led the efforts.

They also received support from IITA staff in Nigeria where IITA already has a plant to produce Aflasafe.

“However, we are very happy and proud of our efforts and the impact it will have in reducing aflatoxins, a major problem in the three countries,” Mahuku added. “It made economic sense to produce the Aflasafe in Tanzania as opposed to Nigeria as the shipping costs would be very high.” They were shipped by road to the two countries.