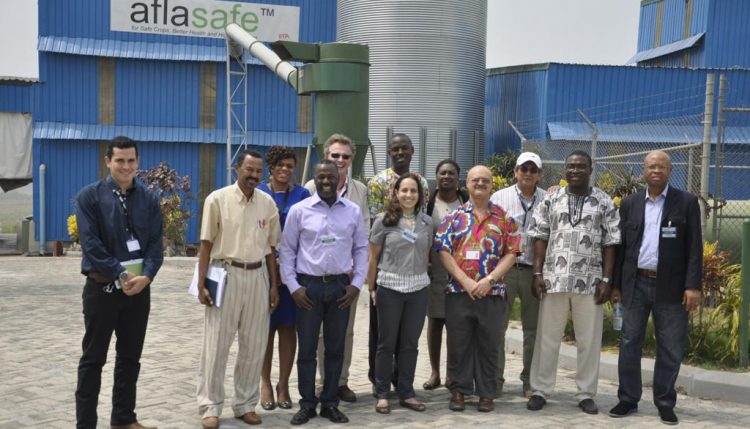 A delegation of three from the US Agency for International Development (USAID), IITA’s foremost donor and co-funding agency of the AgResults Aflasafe pilot project, recently concluded a field visit to IITA-Ibadan to better understand the Project and the planned Africa-wide commercialization of Aflasafe™. 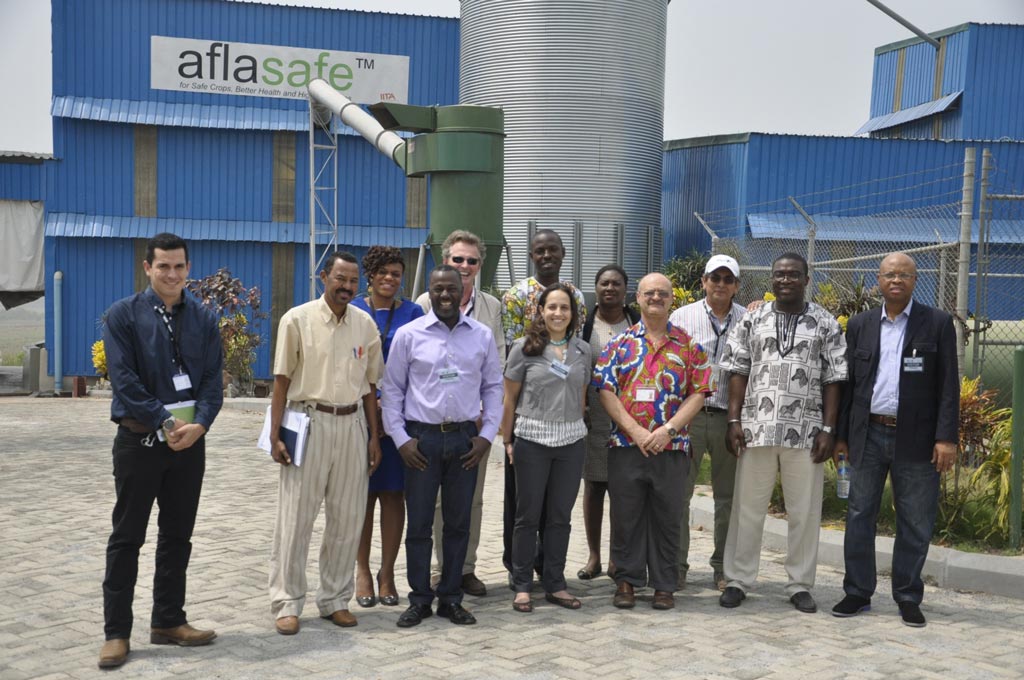 The one-day visit, which took place on 4 February, comprised a briefing session on project development and achievements followed by a tour around IITA, in particular, the Business Incubation Platform (BIP) where Aflasafe™ is produced and stored for distribution.

Kenton Dashiell, Deputy Director General, Partnerships and Capacity Development, welcomed the representatives to IITA and thanked the American taxpayers for their continuous support through the Agency of IITA’s research and development activities and emphasized IITA’s commitment towards involving the private industry for sustainable and progressive development of the agricultural sector.

“We want to say a big thank you to the American taxpayers for contributing to the good work that IITA is doing and has been doing for 49 years…Over the last four years we have placed much emphasis on liaising with the private industry and we are firmly behind the concept that for agriculture to be progressive and to really have an impact on the lives of people across Africa, the private sector has to be strategically involved to provide inputs like Aflasafe™. That is our philosophy,” he stated.

One of the biggest barriers to technology transfer in Africa is the limited private sector engagement in agriculture due to the perception of insufficient markets for products. According to Debo Akande, AgResults Aflasafe™ Nigeria Pilot manager, the AgResults project uses the pull mechanism to encourage the adoption of technologies by smallholder farmers where there are market failures. The Project provides incentives ro aggregators or implementers for every ton of Aflasafe™ maize produced and aggregated.

In the briefing session, Ranajit Bandyopadhyay, IITA Pathologist and Aflasafe project leader, highlighted research developments on identifying regional strains and the development of regional products as well as success stories of the biocontrol product across African countries where it has been piloted, tested, and adopted by farmers.

At the BIP, the USAID representatives were shown samples of Aspergillus flavus strains grown in petri dishes as well as maize grains and groundnut with and without aflatoxins. Abuelgasim Elzein, IITA’s biocontrol specialist, explained the processes used to identify atoxigenic genotypes and to develop the biocontrol product. The representatives also got to see the production of Aflasafe™. Benito Zeledon, Aflasafe™ production supervisor, took the team through the process of Aflasafe™ production.

The USAID representatives were also able to inspect the new Aflasafe™ laboratory that is being built through funding from the AgResults Project, where IITA scientists will expand work on identification of candidate atoxigenic isolates for biocontrol, monitoring of applied biocontrol products in treated fields, as well as understanding factors influencing aflatoxin contamination in maize and groundnut to develop improved aflatoxin biocontrol technologies.

Aviva Kutnick, USAID lead representative of the AgResults Steering Committee, said: “Although I came for other USAID project-related activities, I knew I had to reserve time to come to Ibadan to see the IITA campus, see the Aflasafe™ production site and laboratory, and to meet the scientists and program managers involved in the process. The US Government, USDA, and USAID more recently have been supporting the development of Aflasafe™ for many years. It is important to us as a government and USAID as an agency to continue that support.”

USAID is part of a multi-donor steering committee for AgResults which is a multilateral initiative that provides incentives and rewards high-impact agricultural innovations that promote global food security, health, and nutrition through the design and implementation of pull mechanism pilots.