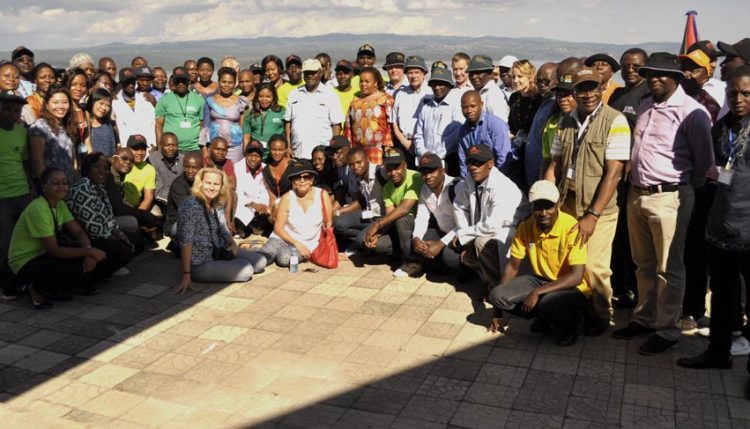 The IITA Board of Trustees held its first meeting of 2016 (10-14 May) in Bukavu, the capital of South Kivu Province, DR Congo. Prior to the meeting, the Trustees spent a day visiting field sites in the province. At the Murhesa Center, a collaborative initiative between the Catholic Diocese of Bukavu and IITA, the Trustees were received by the Catholic Archbishop of Bukavu, Monsignor François-Xavier Maroy Rusengo, who briefed them about the strong partnership between IITA and the network of Catholic organizations in South Kivu for improving livelihoods of the population.

IITA Kalambo staff with IITA Board of Trustees during the BOT meeting held in Kalambo, DRC

“In addition to evangelism, the church must also join the fight against food insecurity and poverty through dissemination of improved technologies and varieties”, the Archbishop said. He hoped that the next joint action would be directed towards livestock (cattle and fish) production. In his response, Bruce Coulman, Board Chair, commended the partnership’s initiative and expressed confidence that it would bring about desired changes in the Catholic community.

The Trustees were conducted round the research farm provided by the Church to IITA and its partners for research, demonstration, and training. They inspected trials on cassava soil fertility, yam germplasm evaluation, and banana propagation, the Youth Agripreneurs’ maize processing facility, and the HarvestPlus biofortified soybean multiplication plot.  The Trustees were also able to see the Youth Agripreneurs maize processing facility at the Center.

A major attraction during the field visit was a cassava processing facility, Community-based Cassava Processing Center (CCPC) owned by COOPTRAF, a farmers’ cooperative located in Katana, 45 km from Bukavu. The facility which is supported by SARD-SC processes about 12 tons of fresh roots into high quality cassava flour every day which it sells mainly through the IITA Kalambo Youth Agripreneurs (IKYA).  The group informed the Trustees that with a guaranteed market, they have secured a loan of $5000 to purchase a flash dryer to boost production.

Leading the tour of the facilities at the Station, the Officer in charge, Chris Okafor, took the Trustees and members of IITA Management to the laboratories where the Trustees appreciated IITA’s efforts in tackling cassava brown streak disease (CBSD) in the Great Lakes region in collaboration with partners and the advances made by the lab in the production of affordable inoculants using local strains for improved legume production.

At the processing facilities run by IKYA, the coordinator, Noel Mulinganya took the visitors around the cassava and soybean processing buildings and their exhibition center where cassava and soybean-based consumable products are on display. IKYA members briefed the Trustees about their activities, especially their work on cassava, soybean, and fish value chains including why they do what they do and how they make money from them.

The field visit and facility tours gave insights into the research-for-development work at IITA Kalambo with partners. Impressed by what they saw, Coulman and DG Sanginga told staff and IKYA members; “We are very happy to be here at Kalambo and very impressed by the excellent processing facilities established here and the youth Agripreneurs’ work on cassava and soybean value chains. You have a beautiful station and your work is magnificent”.

The field visit ended with a stopover at the Youth Center in Bukavu town where the Trustees inspected the various products displayed for sale at the marketing outlet.  These include their own products and products of various Community-based Cassava Processing Centers as well as biofortified beans from HarvestPlus.  The Youth Center has also a well-equipped Resource and Training Unit.  The Trustees acknowledged the efforts and achievements of the youth agripreneurs.