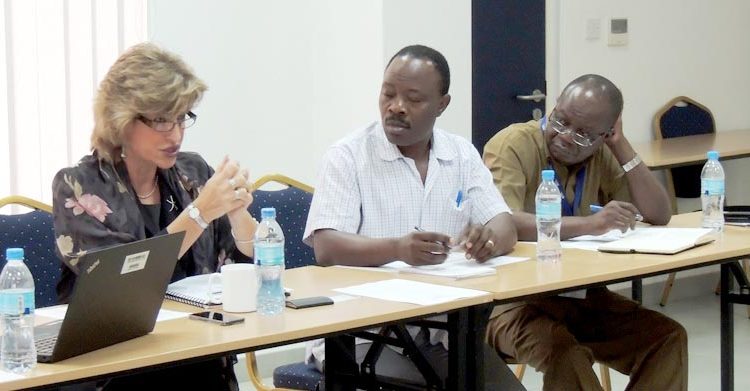 Representatives of CGIAR Centers and Research Programs working in Tanzania recently met a delegation from the World Bank to talk about how the two entities could better work together in the country, specifically to support its national Agricultural Sector Development Agenda.

The meeting, which was organized and hosted by IITA at its Eastern Africa hub offices in Dar es Salaam, provided an opportunity for the World Bank to better understand the activities of the CGIAR centers in Tanzania, and on the other hand for the CGIAR to know World Bank funding opportunities in the country to support agriculture in Tanzania.

Tanzania is currently developing Phase 2 of its Agricultural Sector Development Program (ASDPII) which outlines the country’s priority areas of interventions. The meeting was therefore timely to deliberate how CGIAR could contribute to the execution of the ASDPII and this will further inform the planning for CRPII projects in the country.

“Although Tanzania’s economy is on the upswing, it is still dependent on agriculture, with most of the people employed in the sector living in rural – and generally poor – areas. Therefore, the CGIAR Centers can really make a positive impact on reducing poverty through agricultural development,” said Victor Manyong, IITA Director for the Eastern African Regional Hub, in his welcome remarks.

Regina Kapinga, IITA Head of advocacy and resource mobilization and the focal person for the CGIAR-Tanzania Site Integration process, briefed the team on the CGIAR activities in Tanzania, highlighting progress made since the national stakeholder consultation meeting held in December 2016. She also shared plans and lessons learned from the CGIAR site integration work and encouraged joint proposal development and resource mobilization among CGIAR reps wherever they are located.

“Local champions or ambassadors should be identified at country level to help push the CGIAR agenda in the countries,” she added.

The team from World Bank consisted of Willem Janssen, Task Team Leader (Project Manager) for the World Bank’s support to the Tanzania ASDP2 based in DC, and Sara Simons the Bank’s Senior Agriculture Specialist in Tanzania. Willem briefed participants on the development between the CGIAR and World Bank at higher levels. He mentioned that CGIAR centers could support the World Bank in peer reviewing of projects, providing technical backstopping to the governments as co-designers and executors of funded projects, strengthening analytical work, Climate Smart Agriculture, and capacity building.

“The World Bank is very keen on the CGIAR integration exercise. There is a lot of knowledge being generated by the centers and strengthening partnership and collaboration with national partners will strengthen mechanisms to put this knowledge into use,” Willem said.

Simons, on the other hand, briefed the centers on the activities of the World Bank in Tanzania, and the funding opportunities that the CGIAR could tap into.

She said one of the priority areas for the World Bank in Tanzania was the Southern Agricultural Growth Corridor of Tanzania (SAGCOT), which was being funded to a tune of USD 70 million mostly for supporting private sector partnership investment in agriculture through grants. Related to this, she urged centers to identify mature technologies ready for roll out through Private Sector Partnership and encourage their private sector partners to apply for the SAGCOT funding.