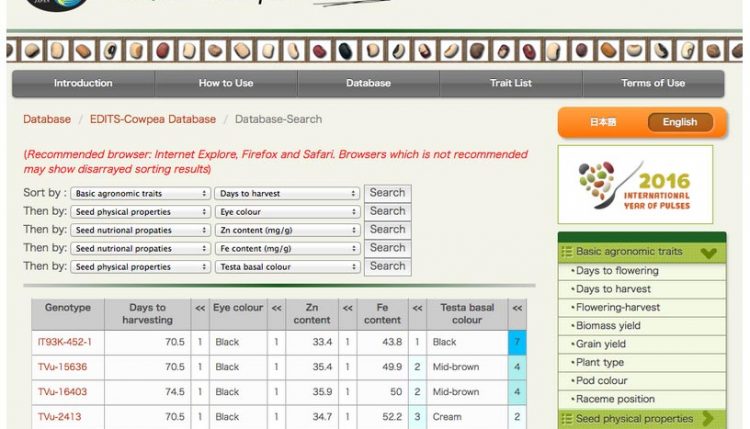 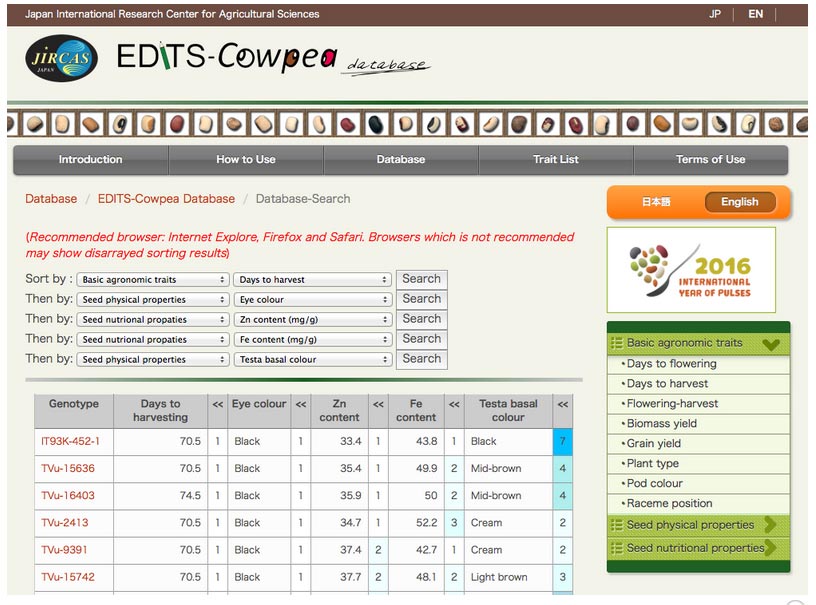 Cowpea is vital to the livelihoods of millions of people in the semi-arid regions of West and Central Africa. It is considered to be the most important grain legume crop in sub-Saharan Africa. A protein-rich grain, it holds great potential as part of a nutritionally balanced diet, especially for people who cannot afford animal protein. The EDITS-Cowpea database was developed to promote innovation in cowpea development.

This database is expected to stimulate the use of wide genetic diversity of the crop in breeding activities to generate new varieties that conform to consumer preferences and regional market needs. With the EDITS-Cowpea database, cowpea breeders and scientists will gain access to a total of 240 genotypes including germplasm, breeding lines, and local varieties; a summary consisting of the origin, trait list, and images of the selected genotype is made available for downloading and printing. The database is expected to strengthen the crop’s role in society and will enable cowpea breeders to identify genotypes with favorable target traits.

The EDITS-Cowpea database was developed under the project “Evaluation and Utilization of Diverse Genetic Materials in Tropical Field Crops (EDITS)” – a collaborative research initiative of JIRCAS involving IITA and several Japanese research institutions. It aims to build up fundamental scientific information and develop evaluation tools for the better utilization of genetic resources. In West Africa, the project focuses on two traditional crops: cowpea and yam.

Activities related to the development of the EDITS-cowpea database started in 2011, and were designed to develop efficient evaluation techniques and a dataset of important traits of the germplasm to identify breeding targets to improve grain quality for future value addition of cowpea. The outputs from these collaborative efforts are expected to contribute to breeding programs of IITA and national research institutes.