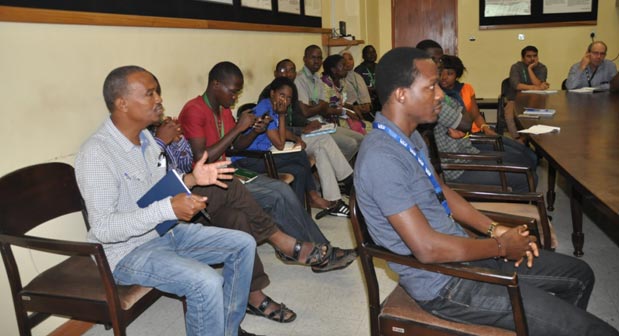 On 15 July, International Association of Research Scholars and Fellows (IARSAF) graduate students and IITA scientists gathered to review and discuss the journal article entitled “Effect of genotype and genotype by environment interaction on total cyanide content, fresh root, and starch yield in farmer-preferred cassava landraces in Tanzania” during the association’s bi-monthly journal club.

A cross section of the audience.

According to the study, high starch yield is the most important trait for commercialized cassava starch production. Furthermore, cyanide present in cassava roots poses a health challenge in the use of cassava for food. Cassava genotypes have varying maturity periods that are also environment dependent. The study thus aimed at identifying suitable cultivars and optimum time of harvest to maximize starch production across three environments.

During her presentation, Moitta-Naisy noted that the study found genotype and environment had a profound effect on all traits analyzed. She posited genotypes should be selected for adaptation to specific environments, optimal harvesting should be based on specific variety and location, and the question of cyanide content in cassava genotype needs large-scale testing to assure the effect of genotype and genotype by environment interaction.

The event closed with a discussion between the graduate students and IITA scientists on methodology in research. IITA scientists present at the event included Peter Kulakow, cassava breeder and Wende Abera Mengesha, maize scientist.

bulletin no. 2336cassavaIARSAFInternational Association of Research Scholars and Fellows