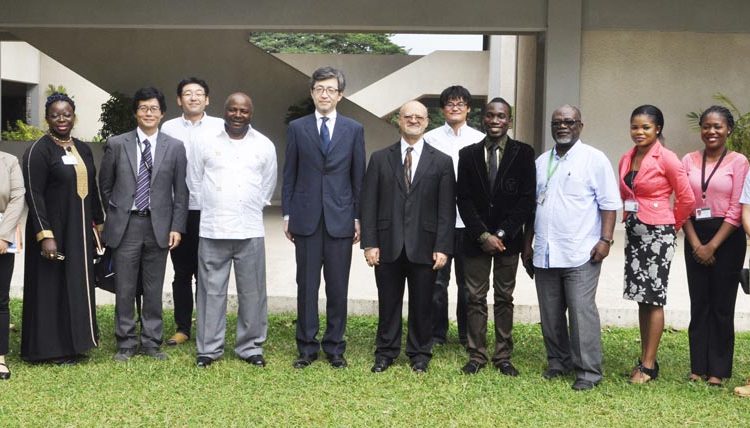 His Excellency Sadanobu Kusaoke, the new Japanese ambassador to Nigeria who assumed duty in 2015, has enjoined IITA management to work out more avenues through which the Japanese government and the Institute can collaborate. He made this call during his first meeting with DG Nteranya Sanginga and IITA management in Ibadan on 5 July.

Kusaoke noted that Japan needs to work closely with IITA to help Nigeria improve its agricultural production and especially benefit its smallholder farmers. In addition to directly supporting IITA, the Ambassador also assured the continuous support of the Japanese government to the Institute through contributions to the World Bank and the African Development Bank.

For many years, contributions by the government of Japan have played an important role in advancing science and research at IITA. This has mainly been through support to the postdoctoral fellow system by the Ministry of Foreign Affairs (MOFA), joint projects with the Ministry of Agriculture, Forestry and Fisheries (MAFF), and also support under various initiatives and collaboration with Japanese organizations, such as the Japan International Research Center for Agricultural Sciences (JIRCAS), Tokyo University of Agriculture (TUA), the Japan International Cooperation Agency (JICA) and other partners. One Japanese private sector company―Taiyo Industry Africa― also has been collaborating with IITA, deploying Japanese technologies to boost fish and vegetable production in Nigeria. In August last year, a mission of Japanese private sectors via the Japan External Trade Organization (JETRO) was held at IITA, paving the way for possible collaboration.

“IITA will continue this good partnership with Japan and work closely to continue transporting new technologies from Japan to the African farmers,” DG Sanginga said at the end of the meeting.

This August, DG Sanginga will participate in the Sixth Tokyo International Conference on African Development (TICAD VI) in Kenya, led by the government of Japan.

African horticultural experts to meet on improving livelihoods through horticulture