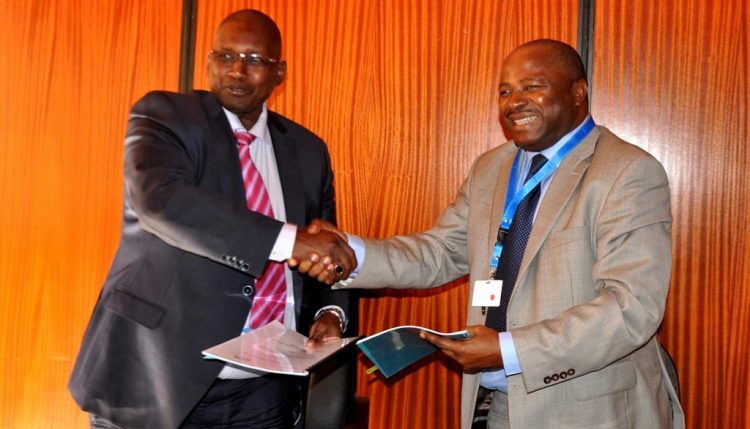 IITA and the Kenya Agriculture and Livestock Research Organization (KALRO) have agreed to jointly manufacture and market aflasafe Ke01™, a revolutionary biocontrol product, which consistently reduces aflatoxin in treated food and feed by 80–99%–in Kenya for an initial period of five years. 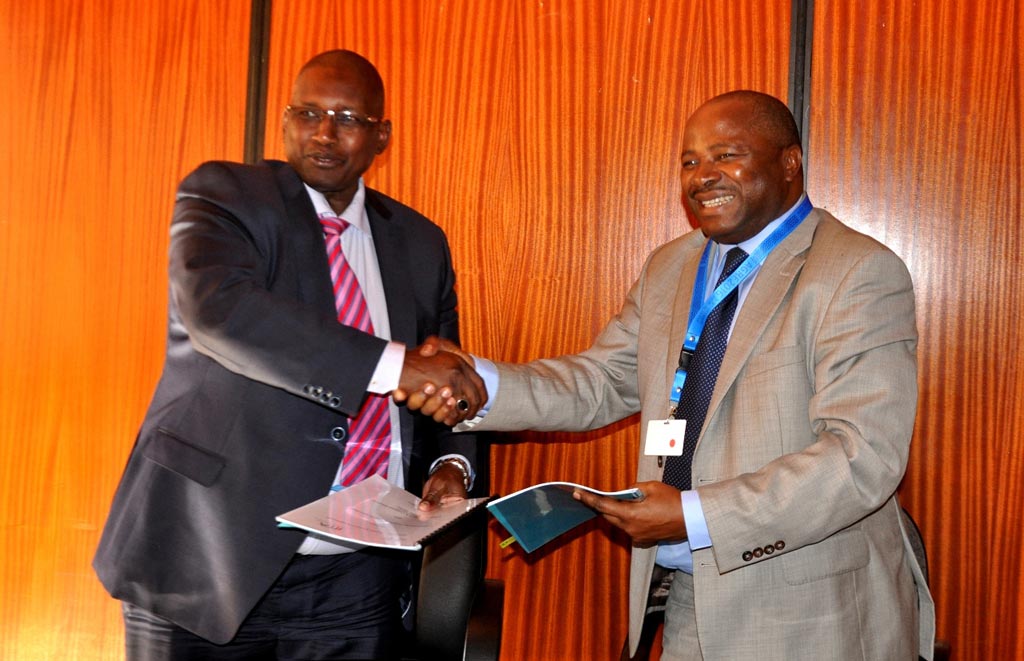 DGs Kireger (KALRO) and Sanginga shaking hands after the signing.

This was after the Director Generals of the two institutions—IITA’s Nteranya Sanginga and KALRO’s Eliud Kiplimo Kireger—signed a Technology Transfer & Licensing Agreement on 12 September at the KALRO offices in Nairobi, Kenya.

The Agreement will facilitate the production and distribution of the natural, safe, and cost-effective technology in the country to reduce future contamination of maize by the killer aflatoxin to secure the food and income of millions of small-scale farmers in Kenya.

The biocontrol technology was first developed by the United States Department of Agriculture–Agriculture Research Services (USDA-ARS). IITA has partnered with USDA-ARS and many other national partners to adapt and improve it in Africa.

IITA, USDA-ARS, and KALRO developed aflasafe KE01™ and the product was officially registered by the Pest Control Products Board (PCPB) on 29 June 2015. KALRO, on behalf of the partners, is the registration holder.

IITA and KALRO had earlier signed an agreement to construct an aflasafe modular manufacturing plant at the KALRO-Katumani campus in Machakos county. The plant is expected to be operational by end-2016 so that farmers will have access to the product in the 2017 planting season.

IITA DG Sanginga thanked the KALRO DG for the support and collaboration in developing the technology which in turn had attracted support from donors such as USAID, the Bill & Melinda Gates Foundation, USDA-Foreign Agriculture Service, the Meridian Institute (on behalf of the United Kingdom’s Department for International Development), and others in the construction of the modular plant.

“This agreement reinforces the great collaboration we have with your team. We are looking forward to the completion of the plant and have it up and running so we can have aflasafe KE01™ distributed far and wide in the country,” said Sanginga.

“We are committed to this collaboration and will make it work for the benefit of the smallholder farmers in Kenya and beyond,” assured Kireger.

According to the agreement IITA and KALRO will together produce aflasafe KE01™ at the modular plant for five years as IITA provides technical backstopping and training to KALRO staff. After this, KALRO will have the option to gradually take over the plant.

Kenya suffers from widespread contamination of food and feed with aflatoxins—a carcinogenic fungal toxin that has serious negative consequences on health, trade, and food security. In recent years, the country has experienced multiple aflatoxicosis outbreaks, often resulting in fatalities.

Aflatoxin is produced by the fungus Aspergillus flavus. However, not all strains of the fungus produce the toxins. The biocontrol technology introduces strains of the nontoxic fungus in the fields where they outcompete and reduce the population of the toxic ones, therefore drastically reducing contamination.

“Kenya is currently importing aflasafe KE01™ from IITA-Nigeria making it costly. So the plant in Kenya will make it cheaper and affordable,” said Ranajit Bandyopadhyay, IITA’s principal pathologist and Aflasafe project leader, who was also at the signing event.

The KALRO team had earlier visited IITA-Nigeria to see the first Aflasafe manufacturing plant in Africa at IITA Headquarters in Ibadan, Nigeria.