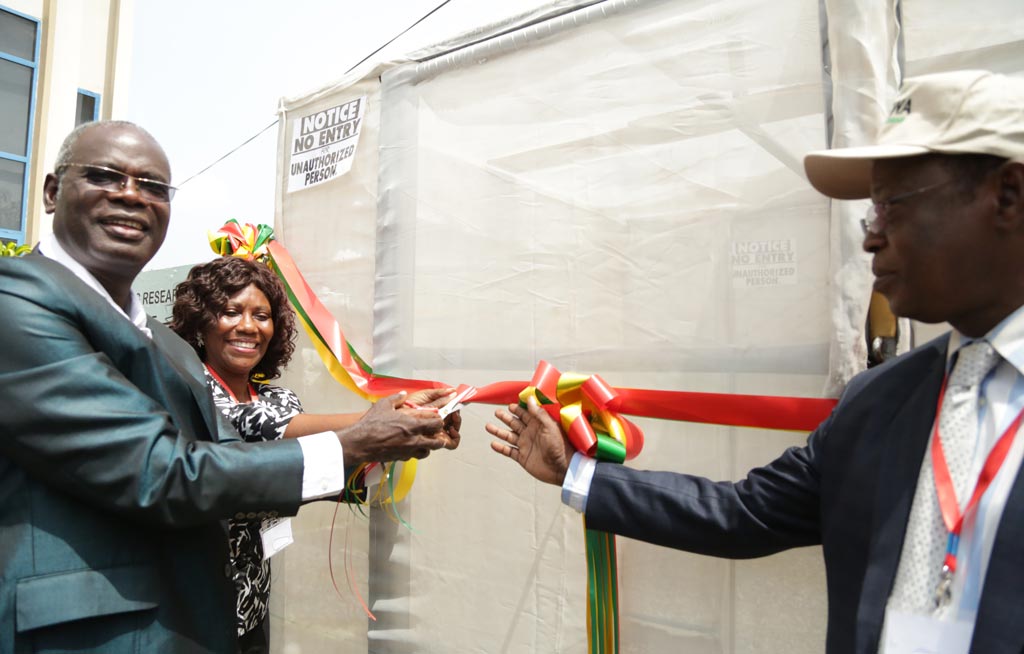 YIIFSWA: Yam is no longer a seasonal crop

With the aeroponics system (AS), yam production is no longer seasonal,” Norbert Maroya announced in his keynote address at the launch of a newly established AS for high-quality pre-basic and basic seed planting materials production at the The Council for Scientific and Industrial Research-Crop Research Institute (CSIR-CRI) in Kumasi, Ghana, on 10 November.

YIIFSWA Project Leader Norbert Maroya cutting the ribbon during the launch of the aeroponics system at CSIR-Ghana.

The Yam Improvement for Income and Food Security in West Africa (YIIFSWA) breakthrough product AS is a high ratio propagation technology developed to address the foremost constraint on yam production. The scarcity of high-quality seed yam of local popular and improved varieties is an endemic challenge for yam production in both Ghana and Nigeria.

Maroya, YIIFSWA’s Project Leader, said that “Yam are conventionally propagated from whole tubers, or tubers cut into an average of 3 to 6 pieces only. This means that 6 new crops are grown from the tuber per year unlike maize where one cob can produce 200 plants in the next season. The seed yam problem is worsened by tuber dormancy which prevents year-round production and uncontrollable sprouting after breaking dormancy, resulting in storage losses and reduced profits. This means only one cycle of production is possible each year, in contrast to cereal crops which can be grown 3-4 times a year with irrigation. With AS, yam production is no longer seasonal. Under irrigation yam can be produced all year-round due to the types of planting materials generated from plants in the AS for seed yam production.”

The inaugural event was chaired by the Ministry of Food and Agriculture Regional Director of Ashanti Joseph Faalong, who declared the breakthrough technology phenomenal and a necessity for yam development given that Ghana is a major yam marketer and exporter.

The establishment of the AS began after an additional grant agreement was signed with the Crops Research Institute’s Biotechnology laboratory in June 2015 on the building of a functional aeroponics system (screenhouse and power house) with 10 boxes of 4 tables each connected to nutrient tanks in a power house for high quality pre-basic and basic seed yam production. The aeroponics screenhouse was completed in July and populated with high-quality plantlets of popular landraces and improved varieties released in Ghana.

So far three improved varieties TDr 89/2665, TDr 95/19177, and Mankrong Pona in addition to three popular varieties Kukrupa, Matches, and Muchumudu are growing at the time of launching in AS.

Astonishingly, the AS exhibition at CSIR-CRI included 3-week-old one-node AS vine cuttings from 3-month-old plants. The vine cuttings had already developed roots and vigorous shoots indicating that the plants were ready for transplanting into the field. During her presentation on the establishment of the AS at CRI, Marian Quain indicated that as a result of the successful establishment and operationalization of the system, they were ready to supply the seed industry with portable AS vine cuttings (42 plantlets) for seed yam production.

Based on the lessons learned AS is fully supported by a solar-powered system which is also connected to the national grid.

IITA to serve as potential ambassador to EU’s project