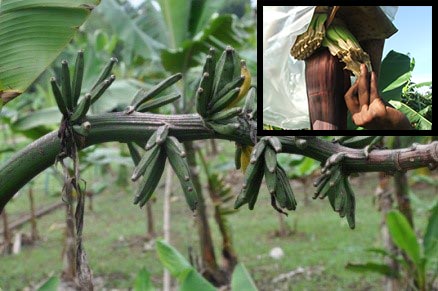 Two IITA scientists have been cited for their work in helping to eradicate the tropical race 4 disease (TR4) that threatens to destroy the Cavendish banana and the multibillion dollar industry associated with it.

A wild banana used in the IITA banana breeding program.

In an article entitled Can the Banana be Saved published by the NOVANEXT journal on 3 November, IITA scientists Rony Swennen and Allan Brown commented on how their research is helping to combat many key diseases and pests by using wild bananas.

An excerpt from the article reads: Some banana breeders are holding out hope that TR4 may cause plantation owners to rethink the global Cavendish monoculture. “Race 4 is a threat, but it’s also an opportunity to start growing more diversity,” says Rony Swennen, the lead banana and plantain breeder for the International Institute of Tropical Agriculture (IITA) based in Arusha, Tanzania. “We need much more wild bananas, from everywhere in Asia—especially from places like Indonesia and Papua New Guinea, where good tasting bananas first originated,” Swennen says.

There are certainly opportunities to grow better tasting bananas. “Cavendish is the Red Delicious of bananas—it stores forever but has a horrible taste,” says Allan Brown, a fruit breeder also at IITA.

TR4 isn’t the only disease threat. Today’s banana will need bolstering with resistance against other key diseases too, such as against the black sigatoka fungus, the bunchy top virus (BBTV), bacterial wilt as well as important pests such as nematodes and weevils. There are currently no sources of resistance against the BBTV and bacterial wilt, but it may be lurking in wild bananas yet to be collected. Limited sources of resistance have been identified against the other threats. A big challenge is to combine the resistance to provide “all-round” protection, a challenge Swennen and Brown are taking very seriously with the cooking bananas that they are working on in East Africa. Their efforts are supported by IITA colleagues screening banana germplasm against those pests and diseases. “We want to breed for long-term resistance, to win the never-ending battle against diseases for at least a longer time,” Swennen says.

Humidtropics markets its legacy products to other CRPs