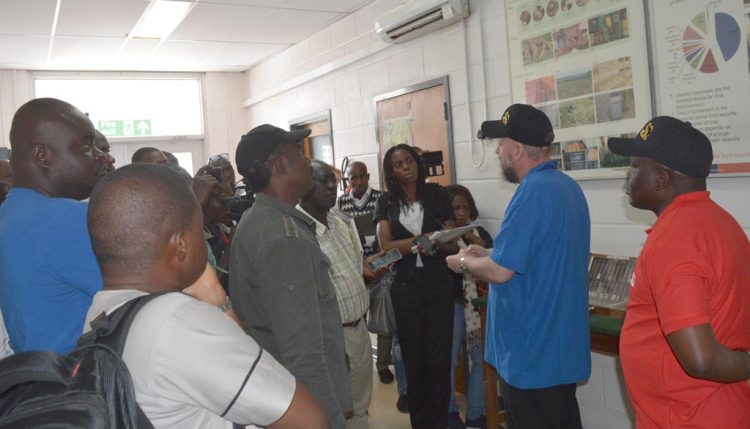 Research breakthroughs over the last 50 years were highlighted during the first Media Day organized by IITA in Ibadan.

Media Day was held as part of preparations to mark the celebration of IITA’s 50th anniversary and to engage our media partners in IITA’s celebration and in “telling our stories to the world.” It was attended by more than 40 media partners from the local, regional, and international press. 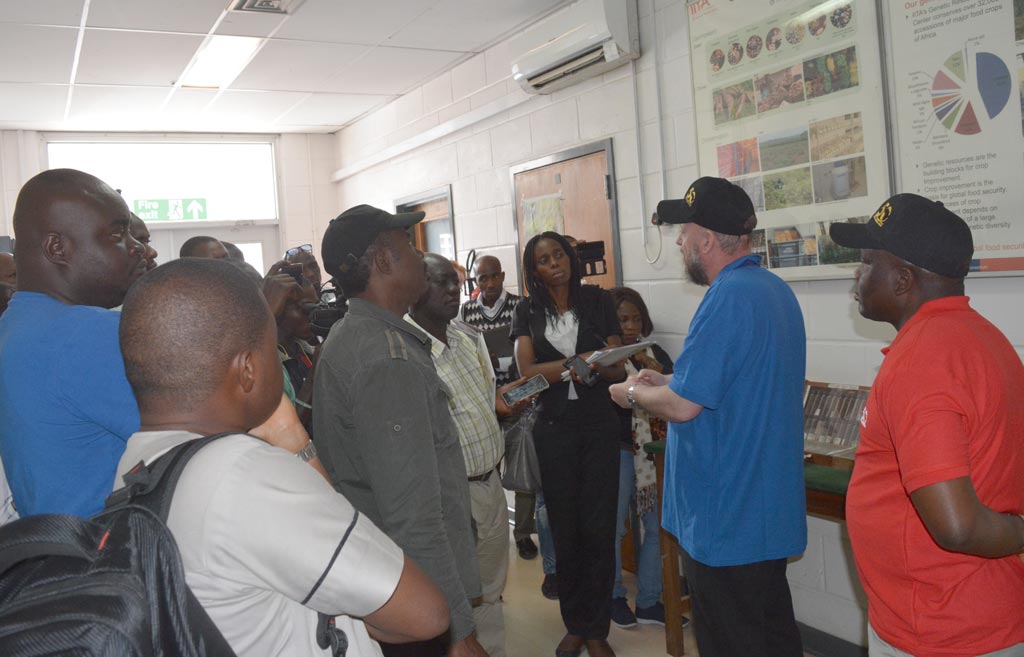 At the Genetic Resources Center, the media practitioners saw seeds of various crops of importance which IITA holds in trust for humanity.

In his remarks, Deputy Director General Kenton Dashiell, Partnerships for Delivery, said “We need the support of media in getting our message out.” He therefore called on greater media engagement in telling the world about breakthroughs and innovations at IITA that could help transform agriculture and lead to development, not only in Nigeria, but the whole of Africa.

During the campus tour, journalists heard stories of IITA’s research breakthroughs—how IITA defeated the Black Sigatoka disease on banana, cassava mealybug, and maize streak virus; the development and use of Aflasafe to make maize and groundnuts safer; innovations that include growing yam in the air (aeroponics) and new technologies to control weeds in cassava.

Journalists saw ongoing research on maize, yam, cassava, cowpea, banana and plantain; and the Africa-wide youth-in-agribusiness initiative (IITA Youth Agripreneurs), which has received strong support from the African Development Bank and about 11 heads of African States.

[su_quote]“IITA stands with the people, and because we are truly people-centric, our goal in the last 50 years has always been to make living more fulfilling for even the poorest of the poor farming households. Even now, IITA will not stop. The Institute will continue to join hands with relevant stakeholders to do its best to transform agricultural practices on the continent,” said Kwesi Atta-Krah, Chair, IITA50 Organizing Committee and Director, Systems and Site Integration.[/su_quote]

On 30 June, a press conference will be held at IITA’s facilities in Lagos, after which IITA’s senior management team will proceed to ring the closing bell at the Nigerian Stock Exchange, officially announcing the Institute 50th anniversary to the public.

The IITA50 celebration received financial support from IITA staff and the Board of Trustees, Dangote Group, Bovas, and Inqaba. Other supporters include Punch Newspapers and the Guardian Newspaper.

Celebrating IITA50 in Rwanda: How collaboration between CGIAR and scaling partners can make science work for farmers