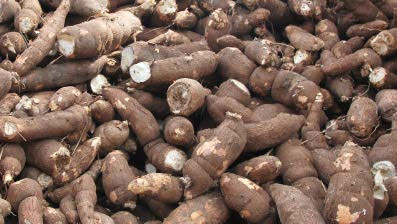 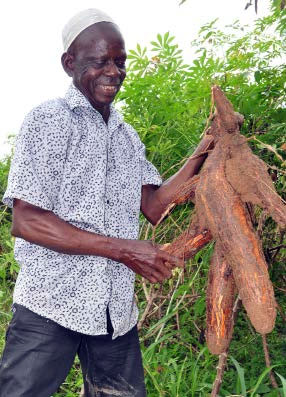 Over a fifth of the food produced by smallholder farmers in sub-Saharan Africa is lost during and after harvesting making a significant contribution to the high levels of poverty and food insecurity in the continent. Therefore, efforts to reduce poverty and make the continent food secure must include postharvest management options that reduce food losses.

This was said by Adebayo Abass, IITA Postharvest Specialist based in Dar es Salaam, Tanzania, who is leading the institute’s efforts to address postharvest losses in Eastern Africa, while giving a seminar titled “Value Chain Innovations from Postharvest Management to Adoption: Lessons for Technology Delivery Agenda.”

According to Abass, factors contributing to the high levels of food losses include the use of inappropriate technologies for harvesting, transportation, storage and processing. Poor storage leads to spoilage and attack by pest and spoilage microorganisms.

He said IITA and partners have been introducing and promoting an extensive range of processing and storage technologies for cassava and grains in Africa. These include technologies that allow farmers to harvest and process cassava into shelf-stable high-value products and low-cost technologies that protect the grains from insect damage. They also reduce incidences of toxin contamination, especially aflatoxins and cyanogens.

Cassava is an important food and commercial crop for smallholder farmers but its production is threatened by its short shelf-life. For the last 10 or more years, IITA together with partners has been working on postharvest management of cassava in Western, Eastern, and Southern Africa.

“Once cassava is harvested, it needs to be sold immediately otherwise the fresh cassava roots will start to deteriorate and cannot be sold at a good price, resulting in high financial loss for the farmers and fresh root traders. It is therefore important to introduce technologies for extending the shelf-life of fresh cassava roots or processing into shelf-stable products such as flour, chips and starch,” said Abass.

From an agro-processing standpoint, IITA has been providing technical assistance to private enterprises to enable them to adopt new technologies for processing cassava such as grating and pressing and mechanical drying.

From 1999 when the improved processing technologies for making novel cassava products were introduced in West Africa and later to East, Central and Southern Africa, the number of processing enterprises have been increasing steadily, providing new income streams for smallholders in many countries. This shows positive response from farmers and private investors towards the technologies.

“We have also tested waxing of cassava roots to increase their shelf-life from 48 hours to more than 7 days working with our partners in Uganda. Another technique—pruning of cassava plants before harvesting the roots—was also found to increase the sweetness of the roots to be waxed. The pilot Ugandan farmers and traders have been selling the good quality and tasty cassava roots to hotels and super markets,” he added.

Research further shows that the mechanical processing of cassava not only improved the quality of cassava products but also limited mycotoxin effect.

According to Abass, the work had shown that the adoption of an integrated system of cassava production, processing, and marketing can make Africa competitive in the global market.  The range of improved technologies and innovations should be introduced simultaneously and targeted at the right category of farmers who have the capacity to apply the technologies to obtain maximum outputs.

While there is the opportunity for cassava commercialization, the crop remains underdeveloped in some regions in Africa due to factors such as insufficient processing options, inadequate marketing channels, and poor linkages between producers and the end users preventing greater profitability for producers and processors.

He also noted the constraints and barriers to participation in the global market: transaction costs and inadequate transportation networks and poor road infrastructure. These significantly increase costs at each node of the chain and limits income for farmers.

He recommended the use of a GIS protocol to predetermine the potential impact of road infrastructure on operational efficiency and access to raw materials before selecting locations for private loan-investments in agro-processing industries. The protocol, which is based on a spatial analysis of road infrastructure, was applied in Nigeria to assess the effect on commercial operation of cassava processors by estimating the costs and distances from cassava production areas to processing centers.

This protocol, he said, could be applied for large-scale technology delivery projects to predetermined locations where agroprocessing technologies can make the highest impact. Abass also emphasized on the need to improve access to credits and market information and land reforms for the success of efforts on cassava commercialization.

“With proper delivery of the technologies and value chain arrangements, Africa can compete favorably with the rest of the world,” Abass said.

R4D Special: Scientists push for use of animation in rural communication