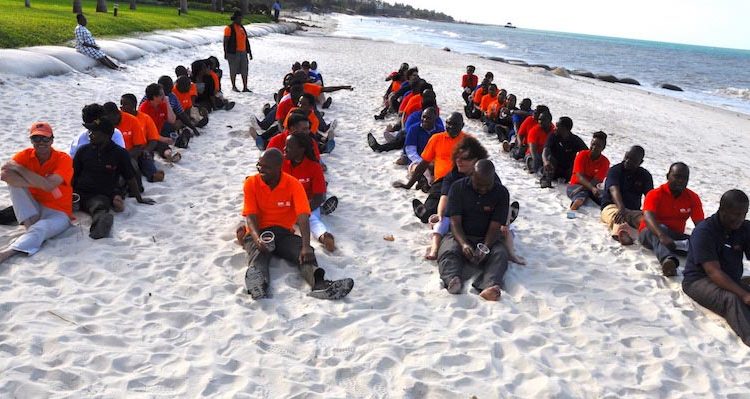 Day two celebrations were mostly internal and consisted of a hub retreat for all the scientists and senior staff at the hub followed by a dinner during which the long-serving staff at the hub were honored.

Scientists bonding through fun activities on the beach.

The hub retreat with the theme “Celebrating the past, building the future” had two sessions—a plenary session in the morning and team building in the afternoon.

The plenary session comprised six plenary discussions  by  each of the  major themes at IITA and by the R4D support and Corporate service teams and focused on updating each other on the progress in implementation of the hub’s strategy and future priorities in the  next 50 years. The retreat was kicked off by remarks from Victor Manyong who talked  about the status of the hub in terms of staff numbers highlighting how staff strength had grown over the years.

Also present was the IITA DDG, Research for Development May-Guri Saethre, who appreciated the two  events as an opportunity for her to  get quickly  acquainted with the ongoing research activities at the hub.

The afternoon consisted of a team building  exercise  led by the Human Resources team at HQ while during dinner  five long-serving staff in the hub were  honored. These  were  Fredrick Nabahire and Godfrey Kasirye, both Field Assistants in the Banana  breeding  program in (Uganda)  who have worked  for 24  and 22  years, respectively. Next were Sophie Swai, Office Assistant (13 years) and Charles Joram,  Driver/Field Assistant from Tanzania (12 years), and Lornah Wanjiru Wamwiri, Office Assistant in Kenya (8 years).

They received certificates, plaques, and gift vouchers from DDG Saethre, hub Director Manyong, and Deputy Director Leena Tripathi who thanked them for their dedication and long service to the Institute.

IITA at 50IITA News no. 2390 (Special edition) - Highlights of IITA50 celebration in the Eastern Africa hub

IITA reaffirms commitment to rural transformation as it celebrates its past