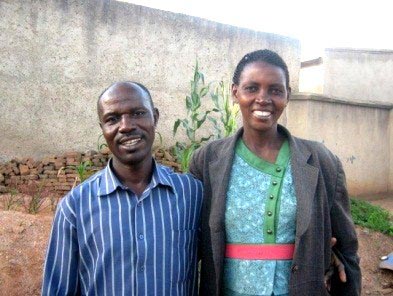 This is the first in a series of articles on the beneficiaries of the N2Africa project, a large-scale, science-based, research-in-development project focused on putting nitrogen fixation to work for smallholder farmers growing legume crops in Africa. The project which is now halfway through its second phase is working in DR Congo, Ethiopia, Ghana, Kenya,  Malawi,  Mozambique, Nigeria, Rwanda, Tanzania, Uganda, and Zimbabwe. The first stories will focus on beneficiaries from Rwanda.

Soybean production and processing have changed her status in the society.

Before N2Africa’s intervention, Claudine Mukayakode, 47, from Mareba secteur, Bugesera District, did not consider soybean an important source of income. She grew some of it to feed her family as it is a rich source of protein. However, today, and thanks to the technologies introduced by the project to not only increase soybean production but to also process it, soybean has changed farming for the married mother of six children. She is on her way to becoming an entrepreneur.

“Before N2Africa, I had no development agenda. I intercropped the crops in my farms—beans, soybean, maize, and cassava—in no particular order. As a result, my soybean production was very low although I enjoyed growing the crop because I knew that by feeding my children with soybean, they would not have kwashiorkor,” she said. 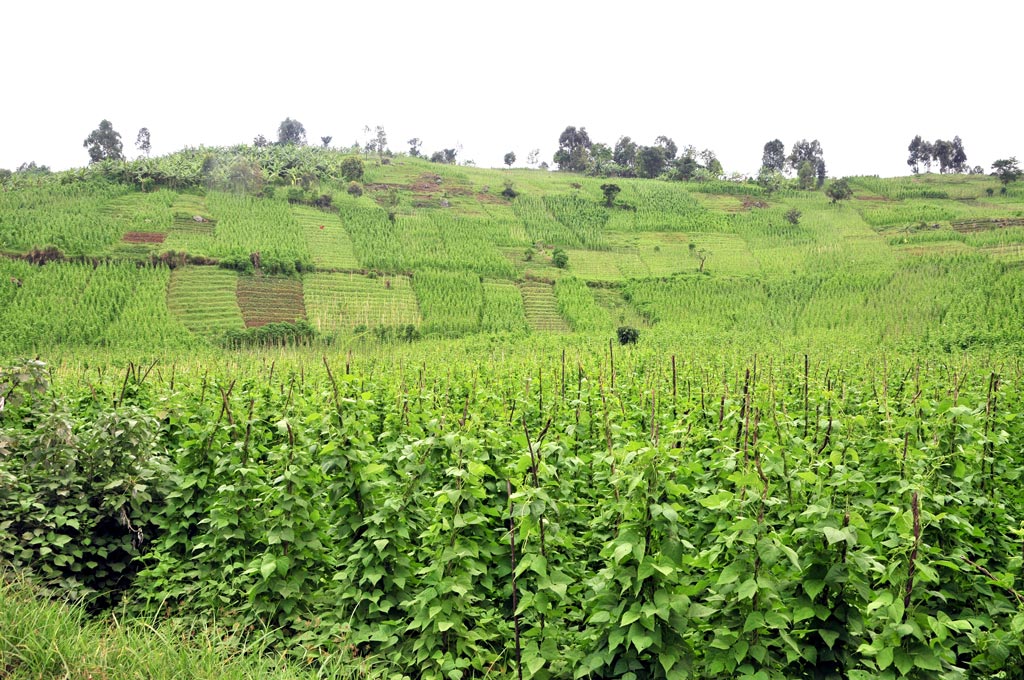 N2Africa introduced technologies to maximize yield in the fields through intercropping and rotation of key staples, maize and cassava with soybean and common bean and the use of appropriate inputs such as organic matter, inoculum and fertilizers, and improved high-yielding varieties. 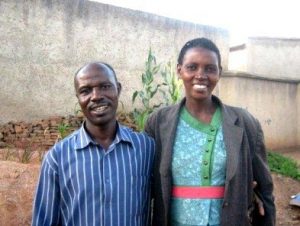 Claudine and her husband Manassé.

“These technologies resulted in increased yields and made me realize that soybean could produce as much or more than beans. I, therefore, intensified my soybean production and whereas before I used to get 30 kg from my small piece of land (0.125 ha), production went up to 270 kg and it was extraordinary.

“In 2013 I was part of a group of 26 women who were trained on the different ways of processing and adding value to soybean. Here my dreams of a better life started because I saw that the 30 kg of soybean I had at home was worth more than 100 kg of beans. During this training, I learned how to make tofu, soymilk, dumplings, soy tea, and others.” 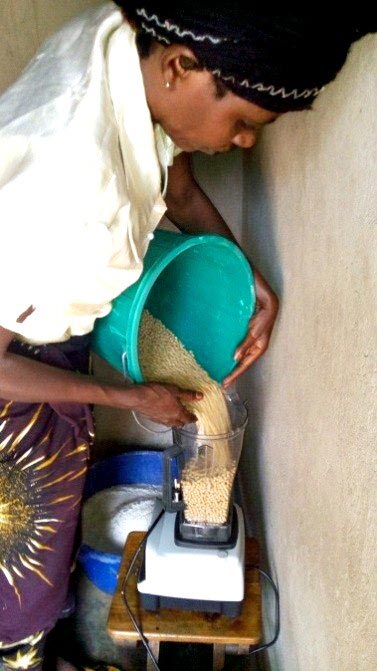 After the training, Claudine started processing her soybean using a local material such as the mortar (Isekuru) and pestle (Umuhini) into milk, tofu, and the popular donut balls for sale and her business grew.

My business grew and soon I could not satisfy the demand from my customers and once again the N2Africa project helped me by granting an electric machine to pound the soybean. Today, I am a supplier of soybean-based products and am recognized throughout the Bugesera District. My business has allowed me to move from category 1 of Ubudehe (socioeconomic categorization of the population in Rwanda) to category 3.

Claudine is not done yet. She wants to expand her business and operate beyond the District of Bugesera and also get her products certified by the Rwanda Standards Board (RSB). She also wants to reach out to other women who participated in the training with her so they can join her and become shareholders in a company that she intends to set up. In future, she sees herself as a President and CEO of a soybean processing plant that would produce various products.

Celestin Gashirabake: From a subsistence farmer to an agro-dealer

Gashirabake Celestin is a member of TWIZERANE Farmers Association which has been working with N2Africa project since 2010 when it hosted two agronomic trials showcasing new improved varieties and the use of inputs. Through the project, the group, which has 25 members, has learned about and adopted new improved farming practices that have seen their legume yields increase tremendously. 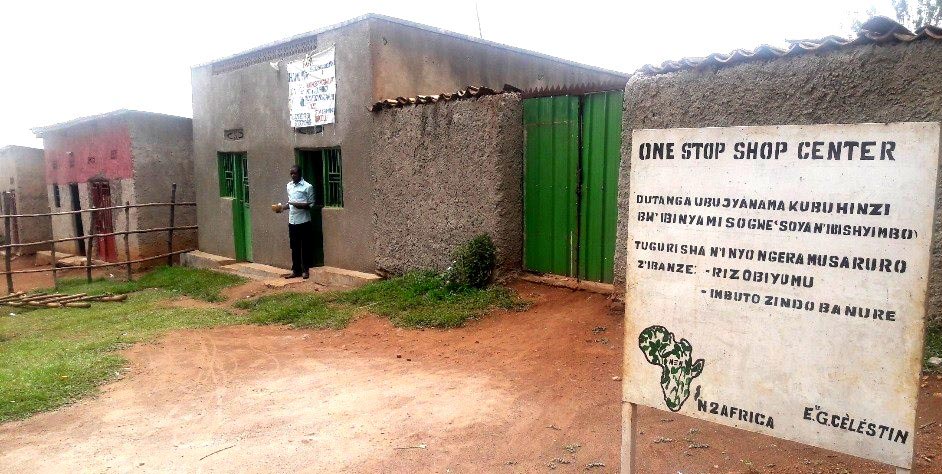 Celestin standing outside his agrodealer shop.

“Before N2Africa started working with us, we used to grow our crops traditionally. We did not use improved crop varieties or apply any fertilizer. The crop yields were always low. However, after we started interacting with the N2Africa project team, we saw the difference between the new improved technologies and our traditional farming methods, especially on the use of inoculation for soybean coupled with the use of DAP fertilizer and planting in rows. They significantly increased production of bush bean and soybean,” he said.

“As a group, we used to produce only for home consumption. We shared among ourselves what we produced. To illustrate how much we have benefited from N2 Africa, we used to produce 80–100 kg of bean and share it among the 25 members. With improved technologies introduced by N2Africa, we have increased production to nearly 400 kg,” he said.

Celestin was selected by the members of his group to become the lead farmer and was trained by the N2Africa project to assist other farmers in biological nitrogen fixation (BNF) technologies. He also participated in study tours organized by the project.

“I attended several training sessions organized by N2Africa around BNF, including a study tour to Western Kenya to visit farmers growing soybean for collective marketing. From there, I changed my perception of agriculture and moved away from subsistence to commercial farming. My group, TWIZERANE, started a community-based seed production enterprise”.

“I also started selling the seeds of the new bean and soybean improved varieties (produced by the group) to other farmers. Since there was no store selling inputs in our community (Musenyi), I introduced mineral fertilizer (DAP) and pesticides, because farmers were asking for them and for advice on how to use them. Because I was trained on agronomic practices, I was capable of helping them”.

Celestin’s aim was to become a certified agro-dealer in his sector of Musenyi to supply inputs to his fellow farmers. He, therefore, made it his responsibility to get certification for input distribution. This was to support farmers’ adoption and the use of any of the inputs introduced in the sector to farmers.

“I made an application to the Ministry of Agriculture (MINAGRO) in 2014 for the certification to permit me to sell inputs. Because of the technical knowledge I had acquired from the N2Africa project, which had been empowering me for more than 4 years, I was able to participate in a training organized by the National Agro Dealers Network, and received a certificate to sell agricultural inputs as an authorized agro-dealer,” he said.

According to Celestin, the awareness created in the community through the exposure to N2Africa technologies made sale of fertilizers and seeds more demand is driven, making sale of inputs easy.

“My next step will be to open another shop in the next community to help farmers from that village because they walk long distances to come to my current shop. I will also buy a motorbike to facilitate my travels around to provide technical advice to other farmers. I will also extend my shop to have a separate space for storing fertilizers and seeds and add other items like safety equipment. I also intend to start collecting soybean from farmers and sell to Soyco Mt Meru Company.”

N2Africa started working in Rwanda in February 2010 in the first phase of the project. It partnered with the government Rwanda Agriculture Board (RAB) to research on technologies and three national NGOs to disseminate technologies to the beneficiaries.

Geographical location: The project covers five administrative districts, two in the high altitude Northern Province for work on climbing bean and one district in the southern Province, and two districts in the Eastern  Province for work on soybean and bush bean crops. In total the project covers 13 action sites from five districts. To date, the project has reached more than 30,000 households directly with BNF technologies. These beneficiaries were reached with direct dissemination packages and/or a demonstration plot hosted by farmers’ groups/cooperatives.

Technologies disseminated:  N2Africa worked to promote and boost the production of soybean and common bean—both climbing for high altitude areas and the bush bean type for the other areas. Farmers were given a dissemination package based on the technology being promoted. These included:

Bush bean and cassava Intercrop: With seeds of improved high-yielding bean varieties, mineral fertilizer, and cassava cuttings plus a field book with the protocol on land preparation and crop management.

Climbing bean and maize rotation: Seed of improved high-yielding varieties of climbing bean, mineral fertilizer plus a field book for the rotation.

The technical message was about increasing crop productivity and improving soil fertility through biological nitrogen fixation with legume crops.