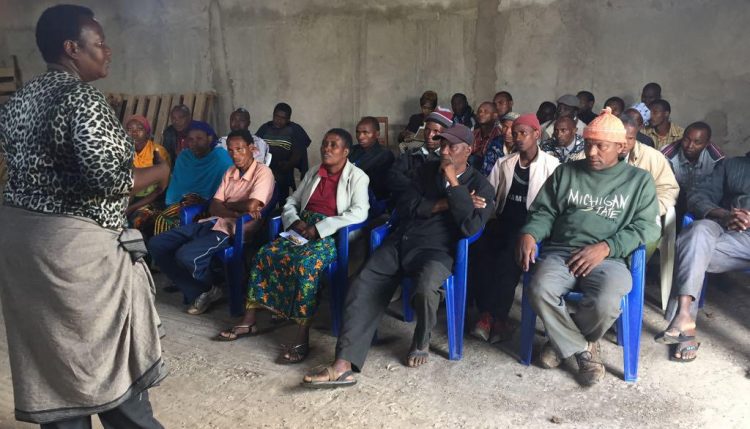 Why aren’t agricultural innovations and technologies that could improve livelihoods not quickly adopted by smallholder farmers? Various arguments have been made to explain the problem on a technology-by-technology basis, but few assess the role played by agricultural extension—often the means through which these technologies are first introduced to farmers—in addressing the problem. 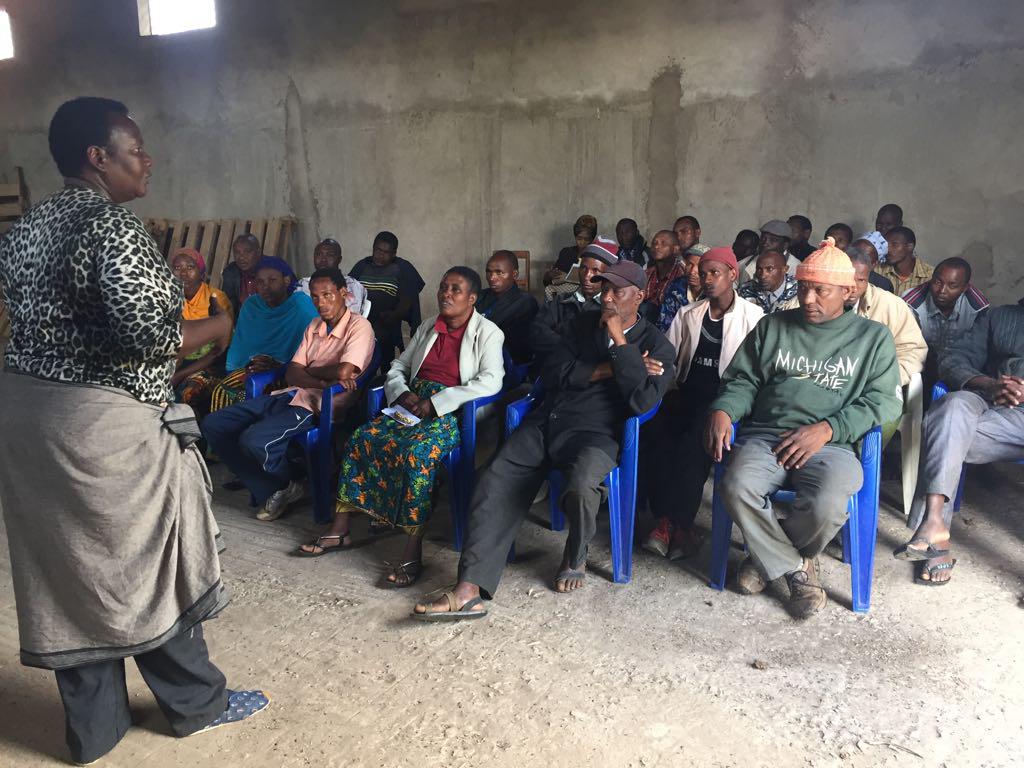 Taking charge: An extension agent talks to farmers during one of the self-organized field days in Babati District. Photo credit: Job Kihara/CIAT.

For the past six years, a multinational and multi-institutional team of scientists working first under the United States Agency for International Development (USAID)-funded Africa RISING program and now in the Africa RISING-NAFAKA project, have been engaged in participatory agricultural research and scaling activities aimed at improving the livelihoods of thousands of smallholder farmers in 10 districts of Tanzania.

The initial focus of the program was on validating improved technologies in a participatory research with farmers. Now the team is taking the technologies to scale directed at thousands of farmers beyond the communities where the validation was done. This wider focus is changing how the project team is going about the business of agricultural extension.

Babati District, the epicenter of change 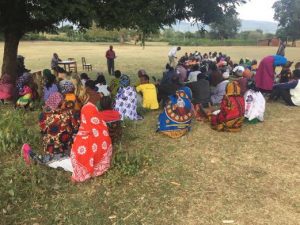 In July 2017, Babati District (one of the 10 Africa RISING focus districts in Tanzania) has been a beehive of activity. Extension personnel from the district, ward, and village levels have been holding farmer field days to share experiences and lessons learned from project activities. Valuable messages about the technologies and practices are being shared in a practical and user-friendly manner, and more importantly, through the extension staff who simplify scientific messages on improved technologies because they “speak the farmers’ language”.

This is a departure from previous farmer field days, which were largely researcher-led. Researchers realized that they can only conduct a few field days and reach a small number of farmers. The project team adapted their methods and began working with extension agents who live and work in the villages. The project team helped the agents to carry out demos and
field days.

“The scientists have worked with us and the farmers to set up demonstration plots for improved technologies; we then take over to educate the farmers through self-organized field days,” explains Jonas Massam, the acting District Agriculture, Irrigation and Livestock Cooperatives Officer in Babati District.

With minimal support from the scientists, the extension agents have conducted field days in 13 villages attracting between 35 and 165 farmers at each event. They have also established a mechanism whereby colleagues from neighboring villages come to help when many farmers are expected.

“The team spirit exhibited by the extension agents is amazing. This kind of effort at the grassroots can quickly transform agriculture for the better. The project will continue providing basic inputs for many more extension personnel to implement demos especially in locations where farmers normally conduct village meetings. This is a good way of using the existing network and local know-how of the agents and farmers,” says Job Kihara, a senior scientist with the International Center for Tropical Agriculture (CIAT) and an agronomist for the Africa RISING-NAFAKA project.

“Our work over the past six years is paying off in a big way. It is good to persist with this capacity building effort for extension staff. We have trained them on technology evaluation and participatory economic analysis and it is encouraging to see them now go out and work with farmers during the field days,” adds Stephen Lyimo, a senior scientist at the Selian Agricultural Research Institute, another implementing partner.

Ensuring consistency in messages and information transmitted from researchers to extension personnel and farmers, and ensuring feedback among actors is key for this approach to be effective.

So far, the training topics for farmers during the cropping season and during the field days led by extension staff include use of improved crop varieties, use of fertilizers especially in sloping fields, appropriate management of farmyard manure, optimum spacing of plants, soil and water conservation measures, and the economic benefits of adopting improved technologies.

Fred Kizito, a senior scientist with CIAT, which implements activities under the Africa RISING-NAFAKA project, says: “This change of tack is a big deal for them. It is make or break—without the commitment of our local partners (extension staff), we would not go far. The number of farmers we are reaching now with improved technologies and practices would not be possible and more importantly, our impact on the ground would be very limited.”

Messages on improving agricultural practices are reinforced with ICT messages from the MWANGA platform to farmers on market opportunities for their produce, and reminders to extension agents to conduct follow-up activities with farmers.

The use of a gender-sensitive technology dissemination approach is also a significant enhancement of extension services. For example, a field day that lasts 3–6 hours is now done in two parts—the first one involves visiting field demonstration sites in separate groups of male and female farmers and evaluating the performance of the technologies, with each group noting key observations and lessons.

This is followed by separate meetings of women and men to discuss the technologies, their associated benefits, profitability assessment, and the key messages. This process is particularly important because men’s and women’s roles, opportunities, and views of technologies are socially constructed and vary across different societies. Having separate groups during the field days therefore helps to ensure that voices of both groups are heard in technology dissemination and there are fewer gender-biased technologies.

This change in approach to extension is expected to lead to the generation of more gender-sensitive technologies by scientists using the feedback from the two farmer groups, enhanced capacity of extension service in remote villages, and stronger links and partnership between the international organizations working in Africa RISING and the NAFAKA programs and the national programs and local partners.