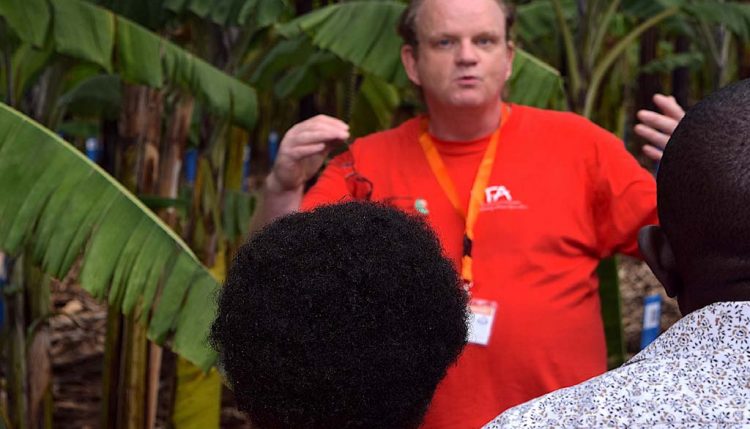 The banana breeding team at IITA in partnership with the national research team in Tanzania, has developed hybrids of one of the most popular cooking bananas in Tanzania and part of the East African Highland cooking banana called “Mchare.” These hybrids were bred with disease-resistant wild bananas and are high yielding with high levels of resistance against key pests and diseases. 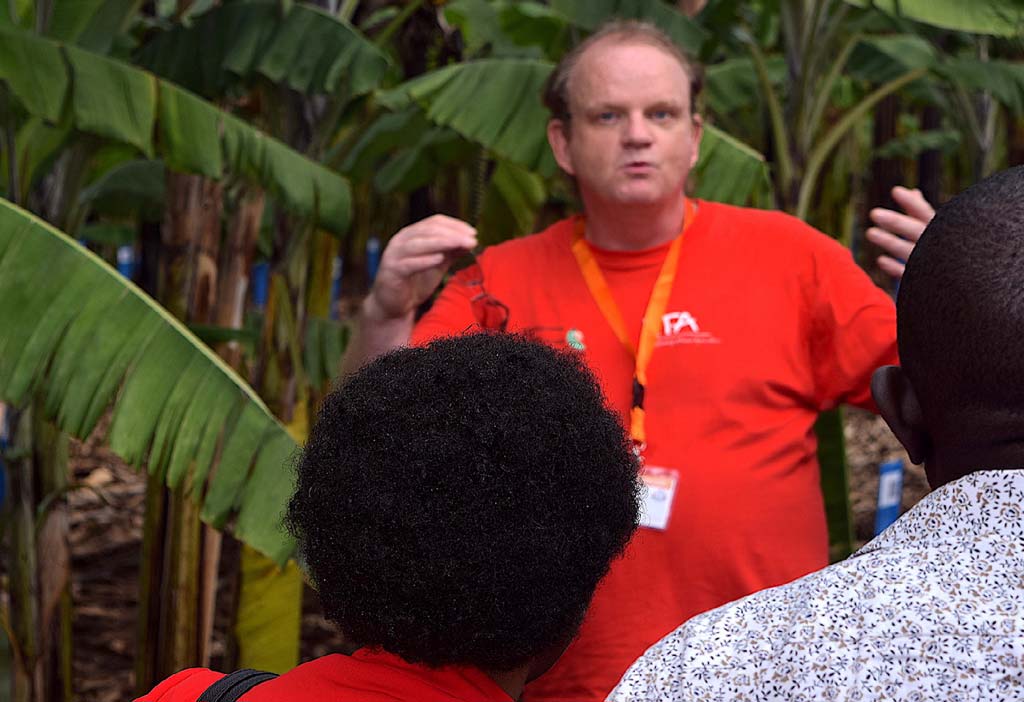 This exciting new achievement has been developed as part of the five-year initiative Breeding Better Bananas, which seeks to boost banana production in Uganda and Tanzania. The initiative is led by Rony Swennen, IITA Senior Banana Breeder.

The breakthrough was among the achievements reported at the third annual project planning meeting held recently at Nelson Mandela African Institution of Science and Technology (NM-AIST), Arusha, Tanzania, 23-25 April.

“Mchare banana is vital to the economy and food security of the Tanzanian Northern highlands and are also very important in Uganda, Kenya, DR Congo and islands of Eastern Africa. Currently, there are no improved Mchare banana varieties available to farmers. Instead, farmers have been growing their own varieties, which unfortunately are low yielding and very susceptible to deadly diseases, especially Fusarium Wilt disease,” said Allan Brown, IITA Banana breeder in charge of the Mchare breeding efforts.

“Here at the Nelson Mandela African Institution of Science and Technology, we have now developed the first ever hybrids in the history of the crop in Tanzania, and this year, they have been planted out into the field for further evaluation. This represents a giant leap forward, but much of the credit belongs to the IITA staff consisting of young Tanzanian men and women who have worked tirelessly on this. They come from this region and know how much it means to the farmers in the area,” he adds.

The guest of honor at the meeting, Cyprian Ebong, the interim Executive Secretary of the Association for Strengthening Agriculture Research in East and Central Africa (ASARECA), applauded the project and the efforts it is making to boost regional banana production. He also noted that while the global export value of banana has steadily increased from US$9 billion to $11.8 billion between 2012 and 2016, the share of this market for African countries has been minimal.

“There are only two African countries among the top 10 banana exporters, Cameroon and Côte d’Ivoire. And one of the reasons is the very low productivity of banana. This project is making use of modern science to improve banana, which gives us hope for improving the crop’s production,” he said.

Ebong further congratulated the project for developing improved hybrid matooke in Uganda as well as the mchare varieties, towards closing the yield gap; identifying molecular markers that are associated with desirable traits to speed up the breeding process, while major efforts to train future banana researchers in Africa are being made through the support of numerous MSc and PhD students.

“The technologies being developed within this initiative also have the potential to be scaled out across other vegetatively reproduced crops, such as cassava and sweet potato,” he added.

Feedback from the project’s scientific advisory committee at the close of the meeting was particularly positive. They singled out the strengthened communication and collaboration across the various project objectives and work package teams. The project is composed of five work packages, which represent the major objectives of the project; each work package has a team of researchers working towards these objectives with partners coming from a range of organizations and countries across the world. Everybody is working towards the main project goal of speeding up banana breeding.

“We have noted improved cohesiveness across the project teams, which is great to see. The capacity building efforts of the project are working very well. Keep up the good work and do not lose sight of why you are doing it,” said Steve Rounsley, Senior Director, Applied Genomics at Genus PLC and Chair of the Committee.

The first work package, Banana breeding pipeline led by the National Agriculture Research Organization (NARO)-Uganda consists mostly of banana breeders and its principal objective is to improve banana breeding efficiency and to speed up the process. The team has developed the first Mchare hybrids and are also pretesting hybrids of another East Africa highland cooking banana, ‘Matooke,’ developed in collaboration between IITA and NARO and thus named NARITA. 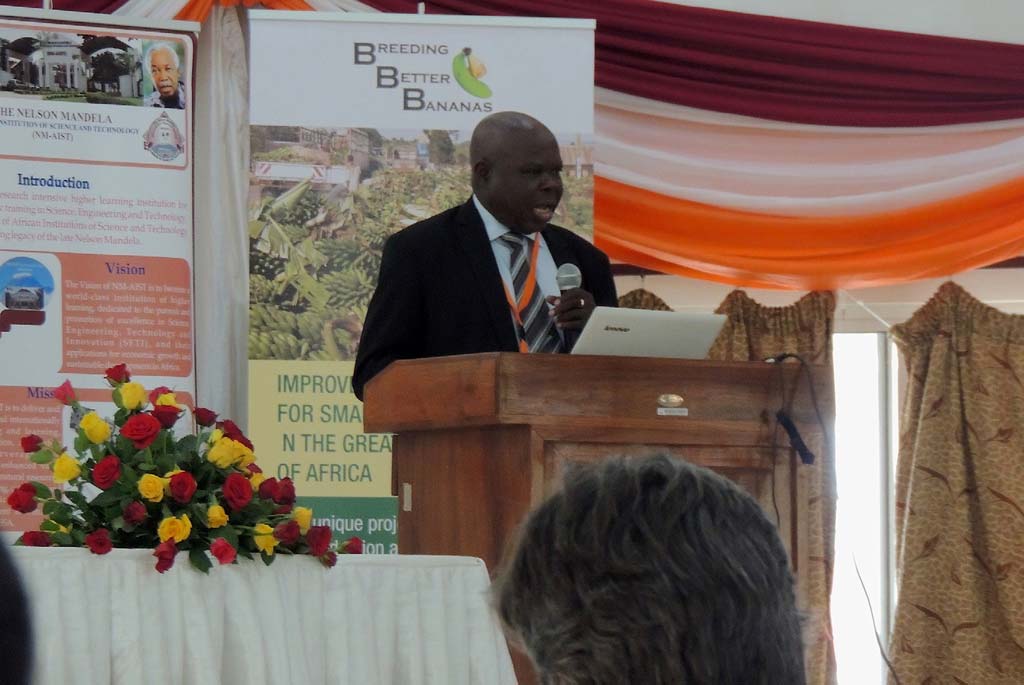 The guest of honor, Cyprian Ebong, the interim Executive Secretary of ASARECA giving his speech.

The second work package, led by Stellenbosch University, South Africa, is focused on the control of pests and diseases. The team is conducting studies to better understand the pathogenicity, spread and damage caused by these pests and diseases, as well as to develop rapid diagnostic tools and faster screening mechanisms to quickly identify resistant varieties. The major diseases that are being addressed by the project are Fusarium wilt and black leaf streak diseases (Sigatoka disease), while the major pests are the plant parasitic nematodes (microscopic worms) and banana weevils. The team has established that black Sigatoka disease is spreading to new areas, perhaps due to climate change.

Work package three, leveraging the genetics of traits in banana breeding, seeks to identify and make use of genetic and genomic tools to develop molecular markers or predictive models for early selection in banana breeding. It is led by the IITA team in Uganda.

The fourth work package, evaluating end users preferences, led by Bioversity International, has been conducting detailed participatory studies with farmers to understand their preferences. It has also been conducting multilocational participatory varietal selection (PVS) with farmers to ensure that new varieties are acceptable to farmers, consumers, markets and other users. Key to this work package are the national research partners in Tanzania and Uganda with field trials in Bukoba, Arusha and Mbeya (Tanzania), and Kawanda and Mbarara (Uganda).

Work package five, harnessing data, has been responsible for setting up MusaBase, a database that enables banana breeders to easily collect, store, and share their breeding data as part of efforts to improve the efficiency of their efforts and to create global access to all the data (genotypic and phenotypic data as well as field layouts). This is led by the Boyce Thompson Institute, USA.

The Breeding Better Bananas project presents a concerted effort by a multitude of partners from across the globe to speed up banana breeding in East Africa. The initiative is led and coordinated by IITA but the work is conducted in close cooperation with the national partners in Tanzania and Uganda as well as international partners from Australia, Belgium, Brazil, the Czech Republic, India, Kenya, Malaysia, South Africa, Sweden, and the USA.

This project is being conducted within the framework of the CGIAR Research Program on Roots, Tubers and Bananas (RTB).