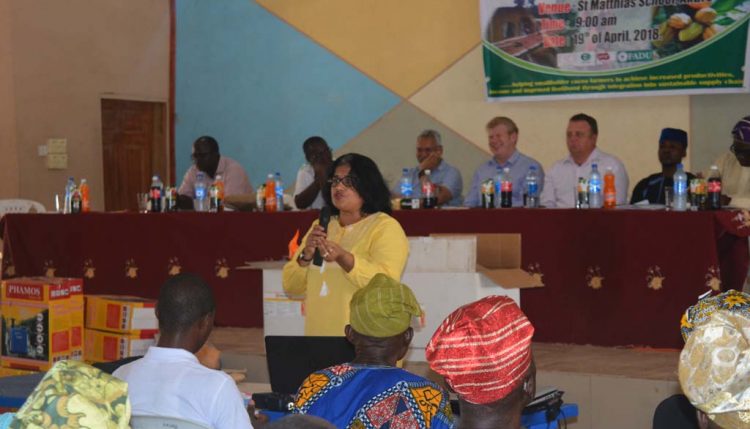 On 19 April, IITA joined cocoa farmers in a Farmers’ Day at Akure, Ondo state. Tulip Cocoa Processing Limited (TCP) in conjunction with Farmers Development Union (FADU) organized the yearly program which honors farmers and stakeholders in the TCPFADU sustainable supply chain for their commitment and exceptional performance throughout the year. 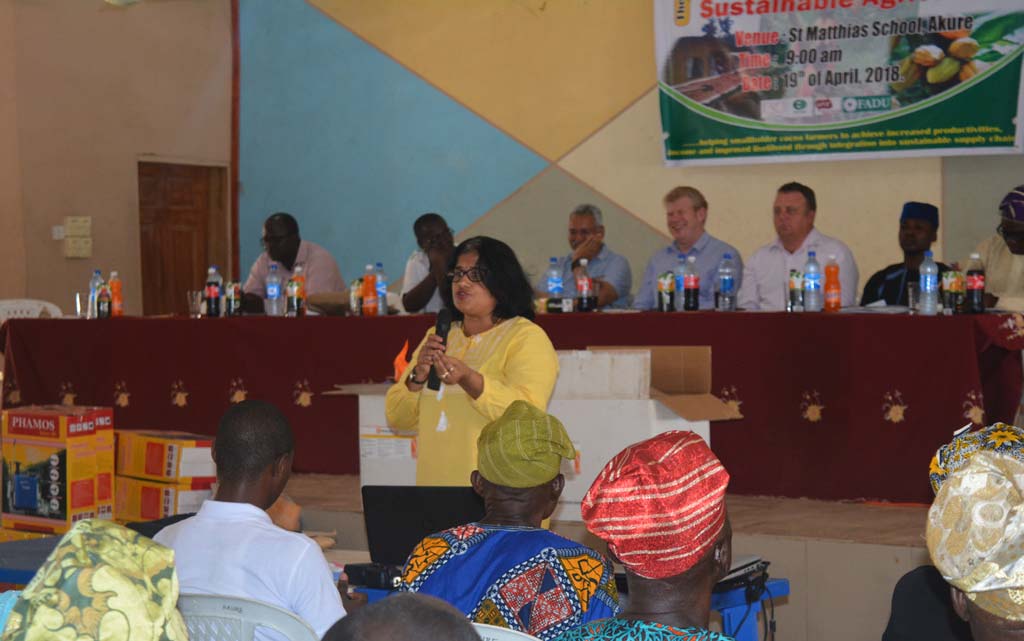 Representing IITA, Ranjana Bhattacharjee, IITA Molecular Geneticist, participated in the event. In her presentation, she chronicled the declining trend in cocoa production in Africa; “In the early 1960s and 1970s, Nigeria was the second largest producer of cocoa in the world. Currently, the Nigerian output has been declining rapidly. The country now ranks seventh in the world and there is a need for us to work aggressively at improving cocoa farming,” she said.

Dr Peter Aikpokpodion, former Cocoa Breeder at the Cocoa Research Institute of Nigeria (CRIN), who developed the eight recently released cocoa hybrids and had been involved in the Cocoa Transformation Agenda of the Federal Ministry of Agriculture and Rural Development (FMARD) under the leadership of former Minister of Agriculture, the Honorable Dr Akin Adesina, gave a talk on transforming cocoa in Nigeria through sustainable use of inputs including planting materials and other inputs. He emphasized the importance of clean planting materials and capacity development of farmers on good agricultural practices to increase the productivity of trees and generate more income for farmers. He also said that it is an urgent necessity to bring in young cocoa trees and cocoa farmers into the sector to revive and increase its contribution towards the GDP of the country. He made a plea to all stakeholders across the cocoa value chain to work together to revise the sector in this country.

For continuity and to develop a brighter future for cocoa farming in Nigeria, Bhattacharjee suggested the engagement of youths in developing a standard process that would ensure profitability and visibility. “At IITA, we believe in the youths and their ability to transform agriculture. Many of you here are getting on in years; your lands as well; please engage young people that will carry on the legacy and bring modern techniques and ideas into your farming systems.”

Towards transforming African Agriculture, Bhattacharjee confirmed IITA’s commitment to promoting agriculture, proffering solutions, and encouraging farmers. “IITA, with national bodies, will continue to assist farmers in whatever capacity we can to ensure food security and improve livelihoods,” she stated.

Farmers who benefited from the sustainability program gave testimonies of how their lives and farming have been transformed.

The event was attended by representatives from Syngenta, Harvest Field, Armajaro connect, and farmers from Ondo, Osun, and Oyo states.