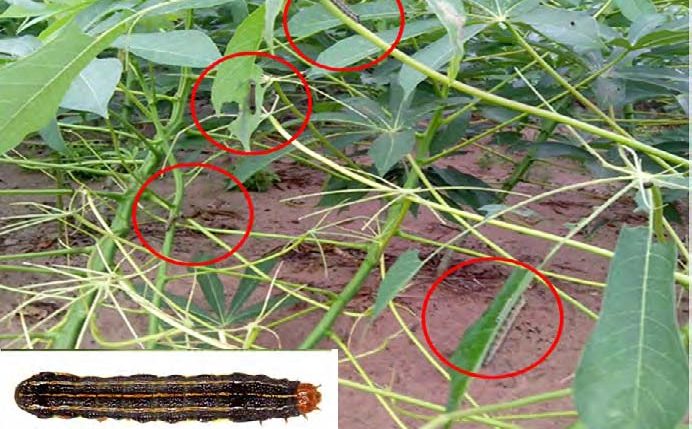 This introduced second armyworm species from the Americas was first found in cassava fields in southeastern Nigeria in December 2016, reported Georg Goergen, Entomologist/Biocontrol Specialist and Head of IITA’s Biodiversity Center in Bénin, but its presence was only recently confirmed by DNA barcode analysis at IITA headquarters in Ibadan. 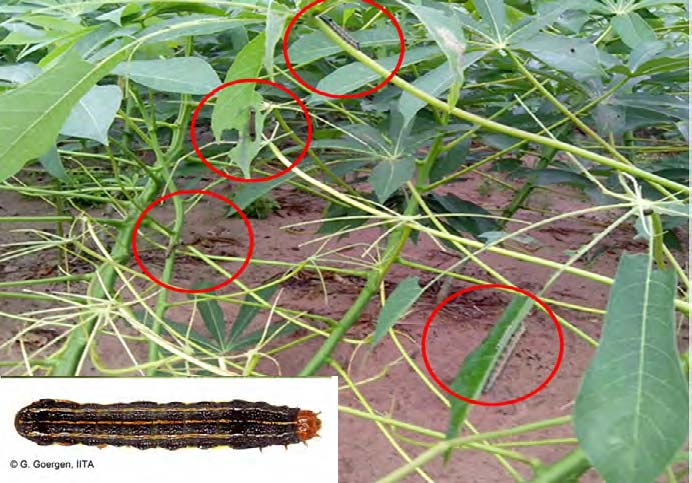 The recent introduction of the fall armyworm (FAW) into the African continent and its growing threat to agriculture and food security have caused great concern in many of the 44 countries of tropical Africa invaded by this pest. Originating from the tropical regions of the Americas the FAW adult has a remarkable capacity for long distance migration and high female fertility. Its crop-destroying caterpillars can cause serious damage to maize but also to other important crops such as sorghum, rice, and vegetables, making the control of FAW a challenging task. The development of management options adapted to Africa has mobilized international experts and the national capacities of affected countries and raised general attention to caterpillar attacks on various crops.

Farmers had first observed an outbreak of caterpillars that caused severe defoliation on cassava in a 450-hectare field near Ubiaja in southeastern Nigeria in late 2016. Alcohol-preserved samples of the larvae were sent for diagnosis to the Biodiversity Center at the IITA station in Bénin, which did not match the morphological characteristics of FAW caterpillars. The species, however, appeared to have related origins and resembled closely the African cotton leafworm (S. littoralis [Boisduval]). In the absence of adult moths, it was concluded that the latter species, widespread in tropical Africa and known to feed on various kinds of food, must have attacked some sweet varieties of cassava that are less toxic to potential insect pests.

Similar observations were made in early 2017, when farmers submitted alcohol-stored samples of immatures for identification following complaints about dense caterpillar colonies in their cassava fields in the areas surrounding Dasso, southern Bénin.

Moths were finally obtained from tomato fields attacked in Yaoundé, Cameroon, and samples of adults were obtained from a scientist-colleague based at the University of Masuku, in Franceville, Gabon. The examination of the outer features of the moths together with the genitalia of both sexes clearly identified the pest as SAW. Larval and adult samples were also collected and sent to IITA headquarters in Ibadan to the germplasm health, virology, and diagnostics unit for DNA barcode analysis. Results confirmed these findings.

According to Goergen, SAW belongs to the cosmopolitan genus Spodoptera that encompasses 31 species worldwide including many of the most important agricultural armyworm caterpillars such as FAW. The detection of the new pest adds to the eight species already known to occur on the African continent. Caterpillars, particularly mature instars of the SAW, are extremely variable in their general appearance and can hardly be identified based on physical characters alone.

The southern armyworm is native to the Americas, occurring widely from southern USA to Argentina. In Africa, spectacular outbreaks comparable to those caused by FAW have not been observed; however, preliminary data show that the species is present in at least four countries in West and Central Africa, where it can be found on cassava, tomato, amaranth, and maize.

It is uncertain how long the SAW has been present in West and Central Africa and its possible pathways of introduction into the continent are also unclear. Since their identification is difficult, populations may have remained latent in the field and only been sporadically noticed especially when young caterpillars aggregate on individual host plants before they disperse upon maturation. An interesting circumstance is that the southern armyworm and the fall armyworm share many important natural enemy species in South America. IITA’s Deputy Director General for Research for Development, May-Guri Saethre, said that while this trait may become a significant stabilizing factor for common natural enemy populations, more research is urgently needed to assess its effective pest status in tropical Africa.