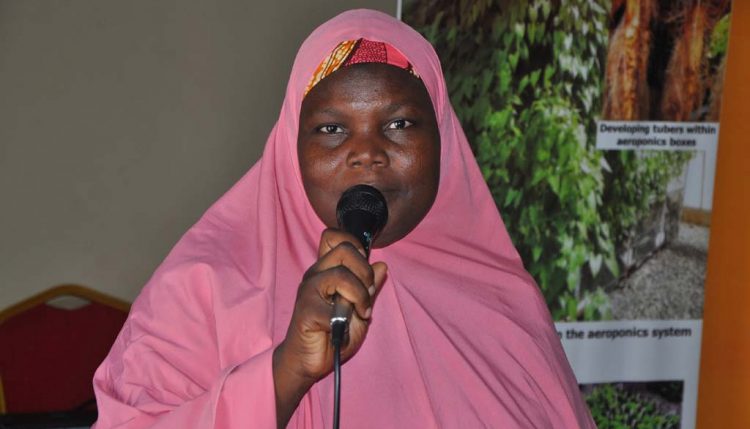 At the close of the CAY-Seed project, the implementing team at IITA assembled more than 100 farmers and agricultural extension agents (AEAs) from some of the major yam-producing states in Nigeria for a 2-day knowledge and information dissemination workshop on quality seed yam production in Kubwa, Abuja.

Opening the workshop, CAY-Seed Regional Project Coordinator Kingsley Osei welcomed participants and said that the workshop aimed to extend the knowledge generated from the project and the lessons learned.

At the workshop were representatives of other IITA yam projects, namely YIIFSWA-II project leader Norbert Maroya and AfricaYam project leader Patrick Adebola. Other partners at the event were Missionary Sisters of the Holy Rosary, who worked closely with farmers in rural Abuja, Perpertua Iyere-Usiahon, Yam Desk Officer at the Federal Ministry of Agriculture and Rural Development (FMARD), and Ebenezer Zidafamor, YIIFSWA-II focal person at the National Agricultural Seed Council (NASC). 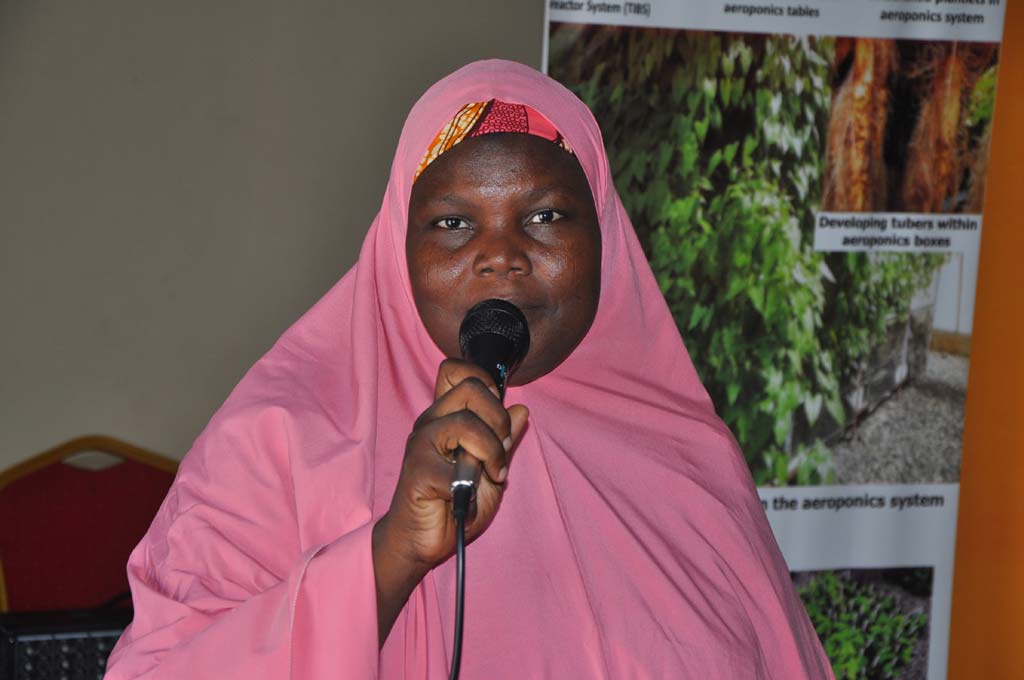 Aisha Abubakar, CAY-SEED beneficiary, sharing her experience and its impact on her life.

The workshop highlighted the importance of yam in Nigeria and West Africa, emphasizing that the region accounts for about 90% of the yam produced in the world. It was noted that although Nigeria is the largest yam producer, it is yet to benefit from exporting yam. Moreover, the production value of yam exceeds the combined value of cassava, maize, sorghum, and millet.

IITA Yam Seed System Specialist Beatrice Aighewi stated that Nigerian yam farmers have low yields, producing only 11.8 t/ha whereas yields in Japan are about twice as much. She attributed the low yields primarily to the unavailability of quality seed yam in Nigeria as yam is traditionally produced as a dual crop- ware and seed yam. It is common to find that tubers saved for planting are often converted to food during lean periods, being further compounded by the absence of dedicated seed producers in most production areas.

Aighewi also noted that most yam producers have a vague perception of the attributes of seed yam quality and will use whatever is readily available for planting. She reiterated the urgent need for establishing a viable seed yam production system and illustrated the value of seed yam in Nigeria and its potential as a business.

Farmers and AEAs were also informed about the advanced seed technologies being promoted by the YIIFSWA-II project to further improve seed yam quality and availability. They were amazed at the potentials of the aeroponics system which grows yam in air.

Some project farmers were given the opportunity to share about their activities during the project lifecycle. Other beneficiaries (farmers) also gave reflections and impressions of the project.

Aisha Abubakar, a farmer from Kwali Area Council, spoke of her initial misgivings about the project and how she eventually stayed the course till the day of harvest. “Currently we have cultivated two fields with yam that we got from the initial demonstration done in our community. Moreover, some of the women are using minisetts to produce seed yam on their own. I wish that CAY-SEED could continue so that more people can have access to the knowledge we have gained,” she said.

Another yam farmer from Kilwankwa, Kwali Area Council, Micah Ishaya, said that the project was introduced to their community in 2016 when a demonstration plot exhibiting advanced yam minisett technology (AYMT), positive selection, and other good agricultural practices was established. He said that both young and old farmers were amazed by the size of the yam setts, not believing they would sprout. To their amazement all the setts sprouted and eventually yielded tubers. He also said that other beneficiaries are using what they have learned to expand their yam farms and fund their children’s education.

Participating women found the technologies less tasking and did exceptionally well on implementation. Now, they are reaping the benefits. All beneficiaries in their testimonials appealed for the project to continue so that more communities can benefit.

A representative of the Agricultural Development Program in Nasarawa State, Steve Kpama, spoke highly of the experience gained from the workshop stating: “Although we are familiar with the minisett technique, I learned from here that many improvements have been made to the technology making it adaptable for farmers to utilize based on their means.”

Based on the success stories and the positive impact at the community level, FMARD Yam Desk officer Iyere-Usiahon said that the project will be adopted by the Ministry and included in the 2019 plan for funding by the Federal Government.