An Africa-wide initiative of the African Development Bank (AfDB), in partnership with IITA to mobilize regional efforts to stop the spread of fall armyworm (FAW)—an invasive pest threatening food supply and incomes of millions of African smallholder farmers—has been launched in East Africa.

The launch was held at a two-day “From plan to action” meeting organized by the Bank, IITA, and the Kenya Ministry of Agriculture, Livestock & Fisheries in Nairobi, on 11 and 12 October as part of the Bank’s Technologies for African Agricultural Transformation (TAAT) agenda.

This is the third meeting under this initiative which seeks to identify ready-to-deploy technologies to tackle FAW in Africa. The others were held in Lusaka, Zambia for Southern Africa and in Yaoundé, Cameroon for West and Central Africa.

The meeting brought together ministerial level government representatives and FAW response coordinators from Burundi, Ethiopia, Kenya, Madagascar, the Seychelles, Somalia, South Sudan, Sudan, and Uganda, as well as experts from the Food and Agriculture Organization (FAO), the United States Agency for International Development (USAID), the Alliance for a Green Revolution in Africa (AGRA), the African Agricultural Technology Foundation (AATF), Syngenta Foundation, and IITA. 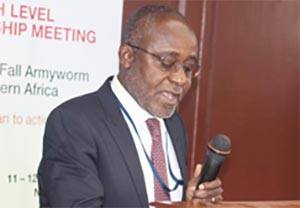 “Reports have shown that, if no appropriate actions are taken, the fall armyworm could cause from 21 to 53% maize yield losses in just 12 African countries within five years. These are valued at US$2.48 billion to $6.187 billion,” he said.

“This meeting is a clarion call in our quest to find lasting solutions to the fall armyworm menace and a first step in identifying robust, low-cost, and effective control solutions that are ready for immediate deployment,” he added.

“We are looking forward to leaving this meeting with technology options to deploy to farmers in the coming season,” he added.

Development partners, researchers, and private sector companies made presentations on ongoing initiatives and technologies for controlling FAW. Country focal points from the represented nations described the status of FAW in their countries and outlined ongoing control efforts. They also identified the most effective technologies from the presentation, and ways to scale them out to smallholder farmers.

One immediate option identified for scaling out was the Syngenta Foundation’s seed treatment pesticide known as Fortenza Dou, which is considered effective against FAW for the first 30 days after crop emergence. 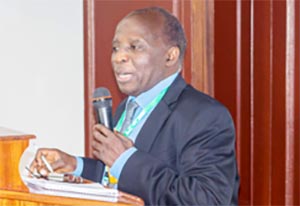 The participants also identified options to finance the delivery of proven technology packages to farmers as well as the necessary policy and regulatory framework reforms to fast track registration of the identified technologies across the region.

“It is important for strengthening partnerships to ensure a coordinated regional approach for such a devastating pest,” said Chris Akem, TAAT Coordinator at IITA.

The fall armyworm adult is dispersed by wind; its later caterpillar stages feed inside maize whorls and cobs where they are inaccessible to chemical sprays. In its short lifespan of about 10 days, a single mated, adult female moth can lay between 1,500 and 2,000 eggs. Therefore, if not properly controlled, many more countries could be at risk, as well as the food and income security of over 300 million resource-poor people in sub-Saharan Africa, particularly in those regions where maize, sorghum, and millet are staple food crops.

Participants at the FAW “plan to action” meeting