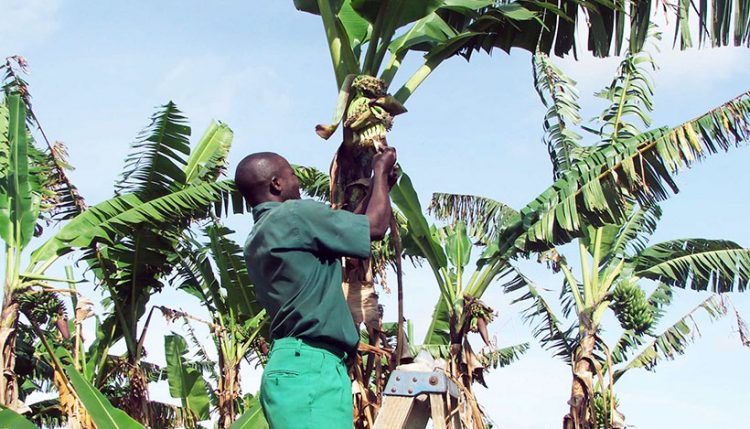 As part of a review of a breeding program for the East Africa Highland Banana (EAHB) started by IITA and Uganda’s National Agricultural Research Organization (NARO) in the mid-1990s, a team of scientists at IITA, NARO, and the Swedish University of Agricultural Sciences (SLU) assessed the progress and efficiency of this breeding program in the past 21 years. One of the highlights of the breeding program has been the delivery of the first-ever hybrids, dubbed NARITAs (NARO-IITA). The review was held at the IITA station in Uganda and outlined progress made to overcome unique botanical challenges encountered in the breeding system of banana. 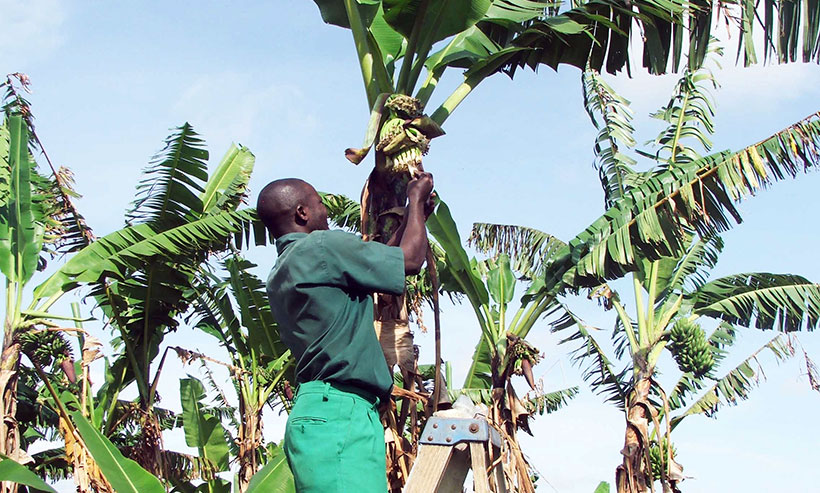 The East African Highland cooking banana, known as Matooke, is an important staple food and cash crop for millions of people in the Great Lakes region of Eastern Africa. Banana covers over 50% of the permanent cropped area in the region which produces more than half of the total banana production in Africa. Burundi, DR Congo, Kenya, Rwanda, Tanzania, and Uganda produce annually 21 million tons of bananas with a value of US$4.3 billion.

Production of banana has declined in the last three decades due to attack by a myriad of pests and diseases, declining soil fertility, and drought resulting in a high yield gap—with farmers’ harvests averaging between 5 and 30 t/ha against a potential of 80 t/ha. Some of the contributing pests are banana weevil and burrowing nematode, and diseases include black Sigatoka or black leaf streak disease and banana bacterial wilt.

Breeding for improved varieties with resistance to these pests and diseases was identified as the most sustainable method for addressing these production challenges. However, banana was for many years regarded as sterile with 0 and 1.5 seeds produced per bunch. The breeding program was initiated when the team identified 37 female, fertile EAHB during screening for seed set after artificial pollination. These banana produced up to a maximum of 25 seeds per pollinated bunch.

Twenty-five of the EAHB hybrids produced up to 305 seeds per pollinated bunch and were therefore deemed fertile. The percentage of seed germination varied among crosses between 7.4% and 26% depending on the type of cross performed. In total, 27 NARITA hybrids were selected for further evaluation in the East African region.

Despite all this progress, banana breeding is a slow process and the team is exploring ways to accelerate this process. Through genomic prediction banana hybrids can now be selected faster. Simultaneously efforts are under way to increase the number of hybrids.

The study recommends further research on pollination conditions and optimization of embryo culture protocols to boost seed set and embryo germination, respectively. DNA marker-aided selection is needed in addition to more research in floral biology and seed germination to increase the efficiency of the EAHB breeding program.

The results of this study were published in Frontiers in Plant Science.