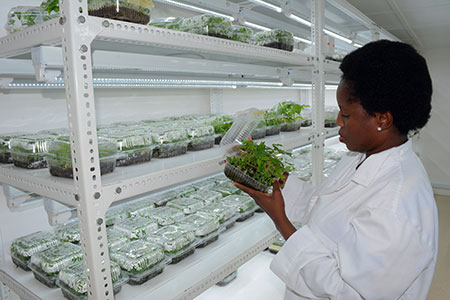 IITA: Championing the rise of a new generation of women in research

As an equal opportunity employer and champion of gender equality in the workplace, IITA has had a good number of accomplished female scientists and researchers over the years. They have paved the way for more women to engage in agricultural research.

One of the younger scientists in IITA Ibadan is Cassava Seed System Assistant Specialist Mercy Diebiru Ojo. She joined IITA as a Research Fellow and due to her extensive and remarkable research work, she has become a Norman Borlaug LEAP fellow, having an aspect of her research work carried out at Cornell University where she held the post of a visiting scientist.

Speaking on the importance of gender balance and women participation in science, technology, engineering, and mathematics (STEM), Diebiru-Ojo emphasized the importance of having women engage and develop skills in these areas as these skills drive innovation and are critical in achieving the United Nations (UN) Sustainable Development Goals (SDGs).

She said, “I believe this has always been a cultural stereotype sidelining females from being found in some professions, hence their professional direction is tailored to other fields. However, I am happy the trend is taking a dramatic change as mindsets are being reorganized and society is now accepting and appreciating females veering into science fields.”

Judith Peter is a Food Analyst working in the Food Quality Lab at IITA Dar es Salaam who joined the Institute in 2016 after completing her diploma in science and laboratory technology at Dar es Salaam Institute of Technology. 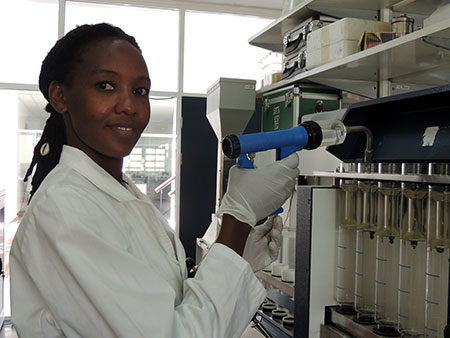 She considers food nutrition all-important and believes her work analyzing food parameters from various samples including maize, carrot, and cassava, among others, will help guide farmers to practice good agriculture that would promote crop health. She also believes women are important to the food security of Africa and encourages having a positive attitude to help achieve our goals for better balance, for the benefit of all.

She remembers her initial nervousness and breaking a test tube on her first day in the lab, but she assures other women across the world that science is enjoyable, practical, and doable for both genders. She says, “To better balance, we should know how to manage our time, invest to gain knowledge about science, and play a part to support our future generations in science.”

Also based in Dar es Salaam is another young female scientist, Fina Mfinga, a Research Technician at IITA Pathology Lab. She completed her bachelor’s degree in Biotechnology and lab science at the Sokoine University of Agriculture (SUA), Dar es Salaam. 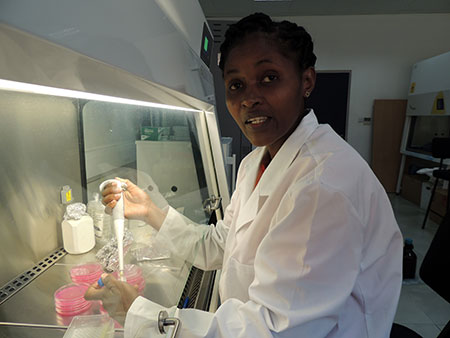 Fina loves science and now performs microbial analysis involved in the processing and production of biocontrol product Aflasafe, which is used to control aflatoxin. Results of her work support the Institute’s scientific research and investigations.

“The beginning was tough as I was completely new!” said Fina before continuing, “I like what I do because it brings impact. Our work focuses on addressing social needs. I believe to succeed we should not get satisfied with our current situation. We need to aim higher and stay ambitious and make significant use of opportunities ahead.”

She hopes to influence the next generation of women by providing opportunities for others, both women and men, to excel. “I see myself in future using my skills and profession to create employment for others. I am determined to become a successful Agripreneur,” she concluded.

With more female researchers coming through the ranks in IITA, the future looks bright for women in STEM as well as all other women, and the world will be better for it.