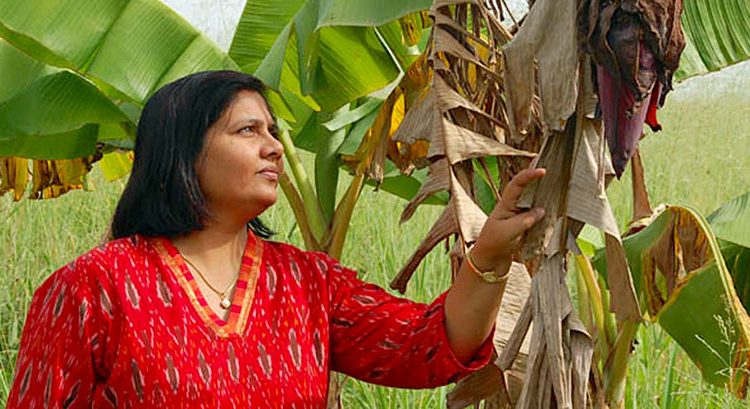 Dr Leena Tripathi is Principal Scientist and Deputy Director for IITA Eastern Africa Hub based in Nairobi, Kenya. She is also head of IITA’s Plant Transformation Research and, in this interview, reveals what makes her tick and her inspiration for being a scientist.

Q: Tell us about how you were as a kid.

A: (Laughing) I do not really remember much about when I was growing up. I think I liked “soft” games and played with “light” toys. Rough-housing was not really me. However, I do remember that I was tidy, even as a small child – I was always putting things in their proper places. You know the saying, “A place for everything and everything in its place”? That is me, even as a kid. I got a kick out of helping my mom tidy up the house. It is the one thing that my mom, even up to this day, remembers clearly that I did as a child.

A: You know, I have always felt that me working on banana as a scientist is, like, fate. My mom always tells me that my favorite when I started eating solid food was the banana. She says that when I cried, all she had to do was give me a banana and I would stop crying. And here I am now, surrounded by and working on my favorite fruit.

Q: Was becoming a scientist Little Leena’s first choice? Or did you want to become something else professionally?

A: As a young child, I had wanted to become a doctor. Looking back, it did not really matter if I became a doctor or a scientist as long as I helped people and communities become better – I have always been passionate about this. I remember that I wanted to become a doctor not just to cure people but rather to invent tools to cure diseases. But growing up in a country such as India where you virtually see doctors everywhere, I asked myself, “Why not be something else?” So, during my MSc, I decided to go into food crops research which still fed my passion – to help people have enough to eat. This ideal drove me to go into transgenic technologies. It is like biotechnology but more specific to genetic transformation for crop improvement.

Q: When did you start working on banana? What were the first things you did research-wise on banana?

A: My first “professional encounter” with banana was in 2000 during my postdoc days at IITA. Before then, I was working on legume crops. When I came to IITA and was assigned to work on banana, I did not have an understanding of the crop. I had to learn, and to learn fast. At first, I was hesitant to ask the experts “silly” questions, afraid to be laughed at. So I went to the people on the ground – the field and lab technicians with my queries. I did get some looks of the “this-is-so-simple-why-is-she-even-asking?” kind from time to time, but I was learning so it was okay. This is why I have a lot of respect for these people. A lot of what I know now started from them. And you cannot develop top-shelf protocols for a crop if you don’t know the basics about it. So, I guess the laughs were well worth it.

My first assignment on banana was to develop a virus-resistant variety. For this, I started developing the protocol for (genetically) modifying banana to make them resistant to certain viral diseases.

Q: It is 2050 and you have retired. Looking back, what will you remember most as a scientist?

A: (Laughs) That is too early to retire! Seriously, I want to see at least one of the technologies that I helped to develop being actually used by farmers and improving lives. I fondly remember this poor farmer in Uganda whom I met in 2004 and touched my heart. At that time, I went to see this farmer’s field through an appointment that a colleague set up for me. On my way to this farmer’s field, my colleague asked me to bring a small packet of sugar. It was a strange request, but nevertheless I went with it. Upon reaching the farm, I met this bent, 60-year plus old farmer who was staying alone in a small hut in the middle of his farm. All around were banana plants, but all were badly infected by Xanthomonas Wilt. His field was completely devastated. I finally understood what the packet of sugar was for: he did not have enough money even to buy sugar for his tea – a simple thing that most of us take for granted. When I handed him the packet of sugar, he was in tears, thankful for the simple gift.

In 2050 when I will be almost the same age as this farmer, I want to see a world where my work has made a difference for people like that farmer. I could then say that I, indeed, lived a full and meaningful life.

Q: Would you say that your research already has had impact on farmers?

A: Well, the technologies that I am developing are still, technically, in the testing phase, and therefore have not yet reached farmers on a practical scale. Most are still under development, except maybe for the disease diagnostic tools that have reached farmers and are actually being deployed and used in farmers’ fields. We will get there eventually.

IITA: Championing the rise of a new generation of women in research