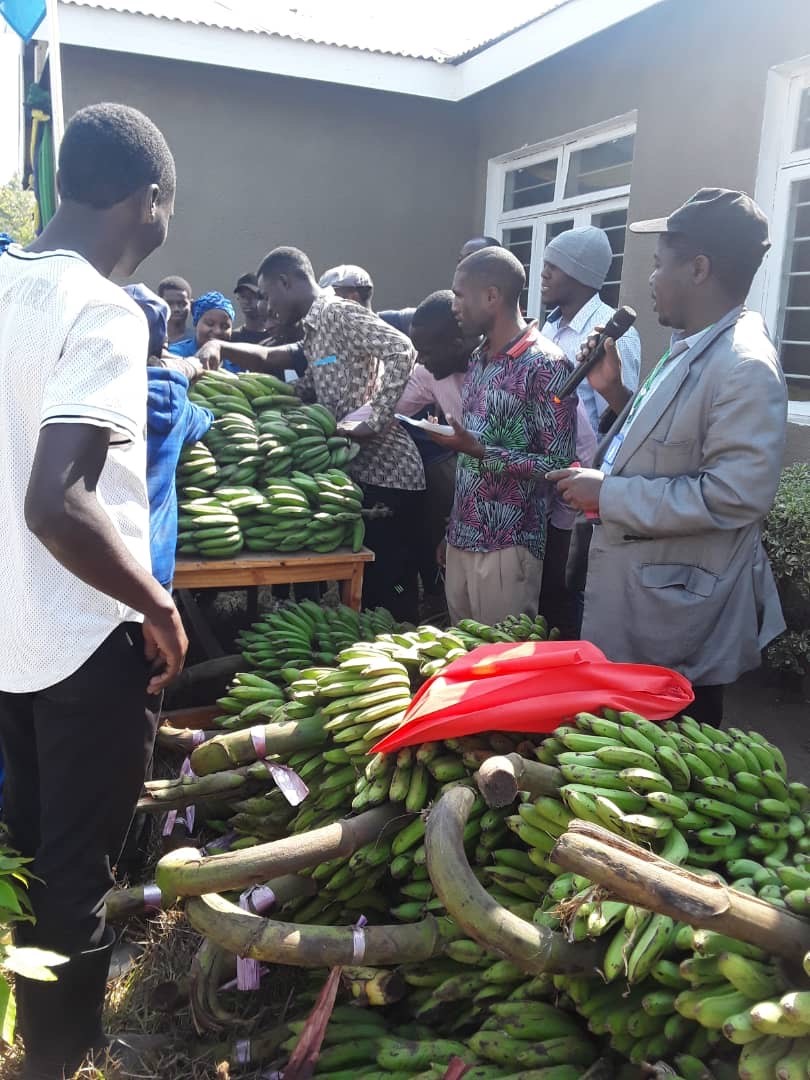 Mbongo Daud Batson explaining the qualities of the new matooke varieties, called NARITA, during the Nane Nane at Mbeya-Uyole.

The East Africa Highland cooking banana, matooke, is a hugely popular food in Tanzania. With the impending release of the first-ever high-yielding hybrids of matooke on the horizon, researchers took the opportunity to exhibit them at this year’s annual agricultural show “Nane Nane” in Tanzania.

The new hybrids created much excitement among the attending farming community, and they look set to score well with farmers who have been helplessly watching as their banana plants are ravaged by pests and diseases, threatening their income and food security.

One such farmer, Anacret Rweyemamu from Katoma village who visited the banana demonstration plot at the Nane Nane grounds in Bukoba, Kagera Region, was excited to hear about the NARITA hybrids. He learned that they were developed from and tasted just as good as their traditional “matooke” varieties such as Mbwazirume and Nshakara and that they are resistant to the deadly nematodes and weevils.

“If what I have heard about the NARITA hybrids is true, then this is very good news for farmers in Kagera Region as, finally, we will have a “Mulokozi” for our traditional “Matooke”, Mr. Anacret said. “Mulokozi” means savior in the local Haya language spoken in Kagera Region.

“Our plantations have suffered a lot because of nematodes and weevils. We have lost many plants during strong winds, and as a result, our plantations are now dominated by FHIA, and Yangambi Km 5. I, therefore, cannot wait until these new matooke hybrids are officially released,” he added as he also requested some of the planting materials of the hybrid to start planting on his farm.

The hybrids were developed jointly by CGIAR-IITA and Uganda’s National Agriculture Research Organisation (NARO), over 18 years. Breeding new bananas is particularly difficult and takes a long time. To reflect the combined involvement of both organizations in this effort, NARO and IITA, they have been named NARITA.

IITA, together with the Tanzania Agriculture Research Institute (TARI), NARO, and Bioversity International, has been evaluating these new hybrids in Tanzania since 2015, to establish which ones are the most suitable for the growing conditions and which are most acceptable to farmers as well as consumers.

The improved matooke varieties most preferred by farmers and consumers were exhibited at the annual agricultural shows at Simiyu, Mbeya, Kagera, and Arusha regions, by the TARI banana breeding team between 1 and 10 August 2020.

Under the direction of the National Coordinator for banana research in Tanzania, Dr Mpoki Shimwela, based at TARI-Maruku in Kagera Region, 29 NARITA hybrids were evaluated for yield, resistance to major pests and diseases, and for their taste in Mbeya, Kagera, and Kilimanjaro regions. These are among the most important banana growing and consuming areas in the country.

“From the trials, we have selected 10 varieties that are yielding 30% higher than farmers are currently getting and which have good resistance to major pests and diseases. These have been identified for future release in Tanzania through the Tanzania Official Seed Certification Institute (TOSCI),” Mpoki said while speaking to the media at the national exhibition at Nyakabindi ground in Simiyu Region.

In Tanzania, cooking bananas are essential as a staple food crop, providing carbohydrates for about a third of the population. However, their production is substantially low, at just 10% of their true potential, due to attacks by pests and diseases, drought, and other factors.

The evaluation of the NARITA in Tanzania, and also in Uganda, is supported by the IITA-led Accelerated Breeding Better Banana project. Together, these two countries account for more than half of the Eastern Africa Highland bananas grown in Africa, and which is valued at around US$4.3 billion. However, access to improved varieties has, to date, not been possible, as they have not been available. Due to the complicated and lengthy process of breeding bananas, it has taken time to develop and evaluate these varieties. The release of these new high yielding varieties, with good resistance to pests and diseases, therefore, creates a historic milestone for banana research and banana agriculture in the region.

And the good news does not end there. The Accelerated Breeding Better Banana project is focused on increasing the speed and efficiency of breeding new, better, higher-yielding bananas for the region, to deliver more improved varieties of cooking banana to farmers faster.

The work is also supported by the CGIAR Fund and, in particular,  the CGIAR Research Program on Roots, Tubers, and Bananas (CRP-RTB)

Other related stories in the media