According to a 2014 International Labour Office (ILO) study, about half a million young women and a quarter of a million young men can grow food, make goods, and provide services to others in Cameroon. However, several challenges impede the impact of their activities. The study shows that these factors comprise unemployment, poverty, and underemployment, despite agriculture being the highest labor-employing sector (about 70% of Cameroon’s workforce).

A recent study carried out by Djomo Raoul under the IFAD-funded IITA-CARE project explored young female grain farmers’ contributions in rural Cameroon to the local economy. 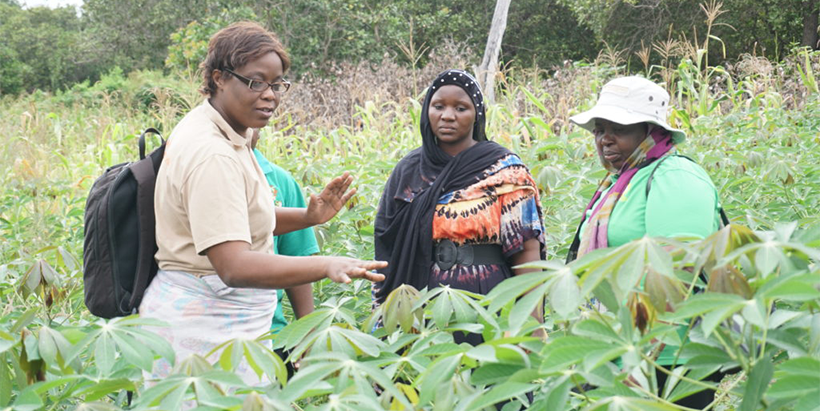 IITA scientist on a maize-cassava intercrop field with female farmers.

Although the female maize farmers pay more for labor, which is better for the local economy, it also means lower returns for them, unlike the male maize farmers who also have access to credit. According to the study, when farm laborers receive a living wage, more non-farm workers can also earn a living wage, as earnings are spent and earned and otherwise cycled through the local economy.  Where farm laborers go unpaid, fewer people can afford to purchase goods and services from others, so less money cycles through the local economy. Thus, those who pay for farm labor contribute more to their local rural economy than those who do not.

According to Raoul, farmers who pay for labor contribute more to the local economy in the Far North Region, North Region, and the West Region of Cameroon where the study was carried out, than those who do not.

The study also showed that maize and rice production and marketing in Northern and Western Cameroon contribute to higher living standards among locals, raising local food security and promoting development in rural communities, where nearly half the population lives.

The findings reveal that if more young Cameroonians choose agribusiness entrepreneurship, they can partially solve rural un- and underemployment, especially among young women. Young women can also be as productive and successful as young men, especially at producing and marketing grains like maize and rice if policymakers can establish enabling environments through gender-positive policies.