His Excellency Rudi Veestraeten, the Belgian Ambassador to Uganda, visited the IITA-Uganda substation at Sendusu on 30 October. The Ambassador was accompanied by the Deputy Head of Mission and Head of Belgian Development Cooperation, Mr Koen Van Acoleyen. 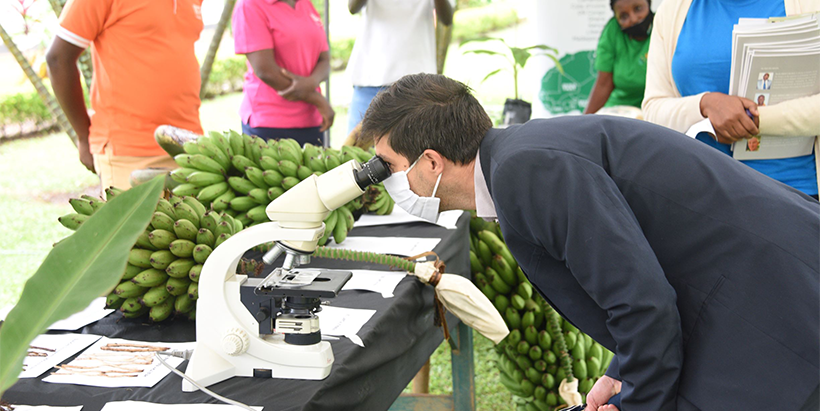 Showcasing IITA’s banana research to the Deputy Head of Mission and Head of Belgian Development Cooperation, Mr Koen Van Acoleyen during the tour of IITA-Uganda substation at Sendusu.

The visit was on the invitation of Rony Swennen, IITA’s senior banana breeder. The Ambassador and his deputy were received by the banana and cassava breeding and research teams, the IITA Youth Agripreneurs, and Dr Chris Omongo, who was representing the Director of the National Crop Resources Research Institute (NaCRRI), the institute of the National Agricultural Research Organisation (NARO) that hosts IITA Sendusu.

During the half-day visit, the IITA research team showcased efforts by IITA and partners to improve livelihoods, enhance food and nutrition security, increase employment, and preserve natural resource integrity in sub-Saharan Africa. This was done through a presentation, an exhibition of the banana and cassava breeding programs and the Ugandan Youth Agripreneurs, and a tour of the laboratories and fields. 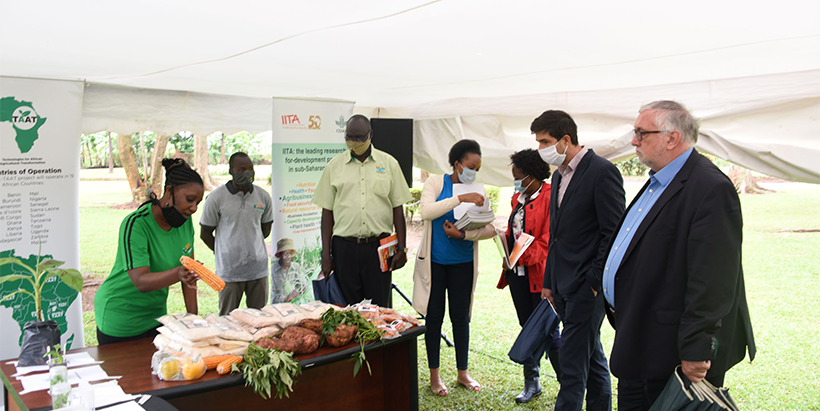 The banana and cassava breeding programs gave the visitors a visual walkthrough of the importance of the two crops as the primary staple foods in Uganda and the region, the production constraints, the breeding goals, the breeding process, and the milestones achieved since the start of IITA-Uganda in 1992. The Agripreneurs showed the visitors some of their products, such as the orange-fleshed sweet potato flour, which is popular with children as a good source of vitamin A.

The visit ended with a meeting with the IITA staff in Sendusu, where the Ambassador commended the IITA Youth program as a good way to encourage the youth to join the agricultural sector. ”I saw this program on youth, where you teach them not only to grow these crops but also to sell and process them into various products,” the Ambassador said while addressing staff at Sendusu station. 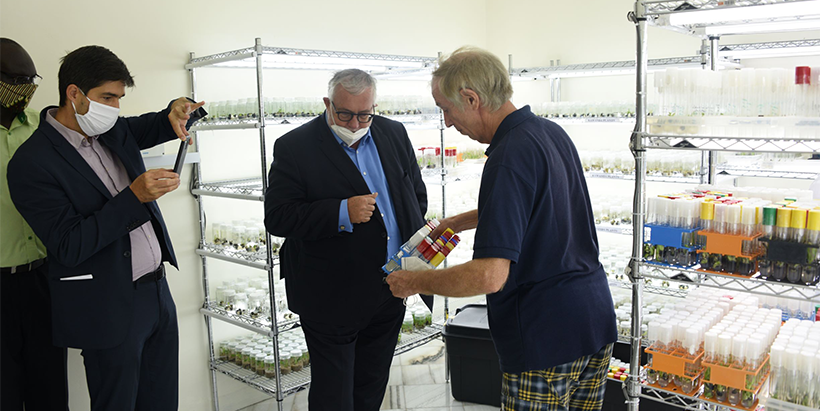 The Ambassador encouraged the youth to venture into value addition and processing of agricultural products such as coffee but emphasized skills development and experience sharing. He noted that, although 85% of Ugandans are involved in agriculture, the vast majority are still practicing rudimentary forms of farming that have spanned generations. Also, one of the effects of COVID-19 is that many people have left cities, where they earned their living, to return to their small farms for survival. The Ambassador promised to support IITA-Uganda in its mission in the region.