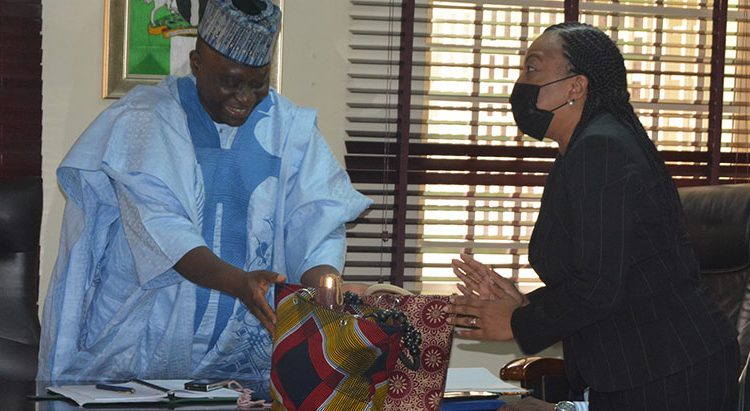 The Acting Director-General Armstrong Idachaba of Nigeria’s National Broadcasting Commission (NBC) has assured IITA of continued support and collaboration. He said this as he received a delegation from the Institute led by IITA Abuja Station Head, Gbassey Tarawali.

In his welcome address, the Acting DG acknowledged that IITA is a well-funded and organized international institute whose operations will flourish further with the approval of a radio license to transmit information to a broader audience. NBC senior officials including Directors were also present at the event.

Oyinlola presenting the NBC Acting Director-General with a token from IITA.

IITA West Africa Head of Administration and Deputy Chair of the IITA Radio Committee, Sylvia Oyinlola, appreciated the Acting DG for receiving the IITA team. She informed him that the radio studio, staff, and radio programs are all standing by awaiting the approval of the radio license from NBC. “This courtesy visit to NBC Management is to ensure that we have done everything within our capacity as a committee delegated to handle the radio license process on behalf of IITA,” she said.

The IITA delegation with the NBC team.

Sensitizing Nigerian youth on the opportunities in agribusiness