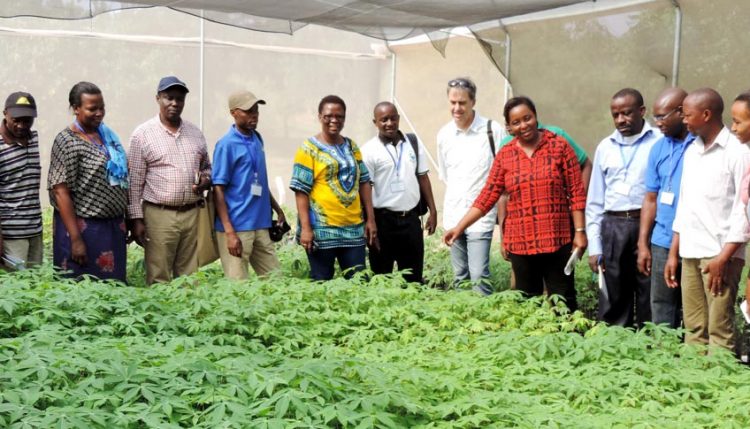 This was highlighted during a stakeholders’ meeting of the New Cassava Varieties and Clean Seed to Combat CBSD and CMD Project (5CP) project, under which the trials are being undertaken, held recently in Dar es Salaam, Tanzania.

The project is funded by the Bill & Melinda Gates Foundation and led by IITA working in collaboration with the national agricultural research systems of Kenya, Malawi, Mozambique, Tanzania, and Zambia where the trials are being conducted. The 5CP project is in its final year of implementation.

This landmark regional initiative is aimed at speeding-up the breeding of cassava varieties with dual resistance to CMD and CBSD in the five countries where the diseases are of great concern.

Edward Kanju, IITA cassava breeder and coordinator of the 5CP project, reported that preliminary results of the trials have already shown that several of the new varieties are virtually unaffected by CBSD and CMD, even in locations where disease pressure is extremely high from infected fields surrounding the trials.

“Although in many of the countries the varieties are undergoing their first year of trials, our initial results are already showing good promise. We will further validate the performance of these varieties by comparing them to local ones that have been selected as checks,” he explained.

In these trials, 25 cassava varieties contributed by and shared among the five countries are simultaneously being evaluated in multiple locations under high-disease pressure field conditions. The planting materials being used in the trials underwent a rigorous clean-up exercise to ensure they are virus-free before being distributed as tissue culture plantlets.

The virus cleaning was carried out by the Natural Resources Institute (NRI) and the Kenya Plant Health Inspectorate (KEPHIS). The material was forwarded to Genetics Technologies International Limited (GTIL), a commercial tissue culture company, for mass multiplication. The plantlets were then certified virus-free by the Mikocheni Agricultural Research Institute (MARI) and IITA.

At the meeting, James Legg, IITA virologist, highlighted another objective of the 5CP Project, which is the establishment of pilot clean seed distribution system in Tanzania. Legg is leading this activity.

“We have established clean seed sites in Mtwopa (Mtwara), Mwele (Tanga), Hombolo (Dodoma), and Nkenge
(Kagera) in Tanzania’s cassava-growing heartland. They are routinely monitored and carefully managed. I am happy to report that there have been very low incidences of CMD and CBSD in these sites.”

“Moreover, the sites are now being used by the Tanzania Root and Tuber Research Programme to produce quality planting material of new, popular, and disease-resistant varieties such as Mkuranga 1, Chereko, Kipusa, and Kizimbani, as well as some of the older favorites, such as Mkombozi, Kiroba, and Mumba,” added Legg.

Another project development reported at the meeting is the establishment of rapid multiplication systems for mini-plants derived from virus-indexed tissue culture plantlets.

Kiddo Mtunda, cassava researcher and Officer-in-Charge of the Sugarcane Research Institute (SRI) in Kibaha, is spearheading this work. By using these rapid propagation techniques in screenhouses, she and her team have been able to produce thousands of cassava plants in a matter of months.