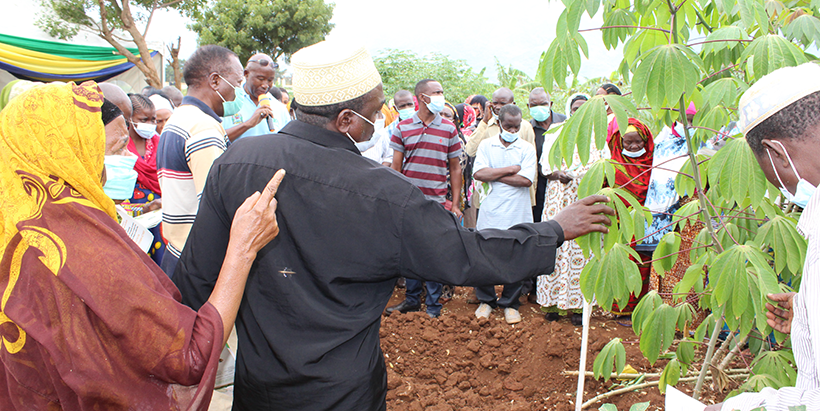 Over 1,000 acres of land in major cassava growing areas of Tanzania have been planted with new, improved cassava varieties. Nearly all the seeds of improved cassava varieties produced during the 2021 planting season have been sold. These were among the highlights reported by the Building an Economically Sustainable Seed System for Cassava in Tanzania (BEST Cassava) project.

As the name suggests, the BEST Cassava project seeks to build sustainable seed systems that enable farmers to access new and improved varieties in Tanzania. Stephen Magige, the BEST Cassava Country Project Manager, noted that the project’s marketing efforts of new, improved varieties had seen 97% of cassava seeds produced during the 2021 season sold. He added that many farmers in project areas had started using seed from registered commercial seed multipliers.

Participants visiting a cassava seed producer as part of the meeting.

Magige and other team members shared the projects’ highlights during a recent semi-annual review meeting that brought together implementing partners to share updates and achievements from the various project components, including superior varieties, quality assurance, commercialization, and the advocacy and mainstreaming component.

The project manager at MEDA Headquarters, Nadira Sale, and Program Officer Lawrence Kent of the Bill & Melinda Gates Foundation, expressed their pleasure on the excellent implementation and good collaboration with project partners.

The project team further brainstormed on the sustainability of project activities once the project ends. This included strengthening collaboration with other projects, such as the upcoming Muhogo Bora project, which will build on the efforts of the BEST Cassava project.

The team will continue popularizing the newly released varieties by establishing demo plots in all major cassava-growing zones for farmers to get familiar with the varieties. The adoption of these varieties will boost cassava production and productivity in their respective areas.

The assistant project manager from IITA, Bahati Maregeri, said that, as part of efforts to promote new, improved cassava varieties, the project plans to continue conducting farmers’ field days for variety assessment to appreciate the benefits of using improved varieties. He added that the project would continue to work with the media to increase awareness of these new varieties among farmers.

A representative from the Ministry of Agriculture, Upendo Mdeme, also presented the National Cassava Development Strategy, developed in collaboration with the BEST Cassava project. She said the government wants to promote and facilitate cassava commercialization through strengthening cassava product markets and marketing infrastructure and farmers’ access to financial services. 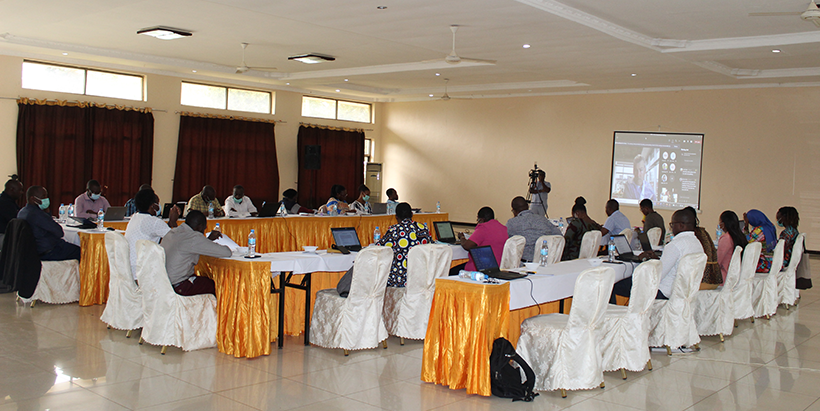 A cross section of the participants at the BEST-Cassava meeting.

“We are going to have a dialogue with financial institutions so that they can increase their financial services to our farmers and stakeholders,” Mdeme added.

The Annual Review meeting assessed the project’s implementation progress over the past six months and planned for the remaining period before the project phases out in December 2021.  Different partners, including representatives from the Ministry of Agriculture, MEDA, IITA, and TOSCI, attended the meeting.